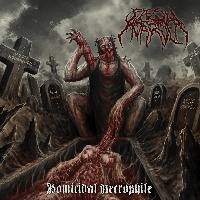 A seemingly brand new brutal death metal Texan outfit Flesh Hoarder actually formed in 2011 and right away released "Infatuation With Menstruation" demo which featured tracks re-recorded later on "Homicidal Necrophile" full length. The guitarist and bassist Mike DeLeon did time in Philip H Anselmo & The Illegals so you know we’re talking professionalism and top notch material, which, along with Smoke Break Studios production should guarantee good time. Does it?

For one, Flesh Hoarder does sound pulverizing. The intro "Between Life And Death" is simplistic, melodic, Slayer-ic and goes right into a furious Nile-istic brutal death metal for "Ritualistic Rape Victims", main riff borrowed from All Shall Perish’s "There Is No Business To Be Done On A Dead Planet", and then it’s basically all in the same vein for a few tracks: catchy, steady and versatile great drumming, Obituary-ic through Nile-istic to Suffo’catory by the way of Cryptopsy-ic riffing with occassional melodic bursts, audible but mostly conforming bass, great if not particularly innovative slow riffs, Aborted-like vocals, split between rasps and low gutturals, breebreebree, rinse/repeat until the creepy intro from "Texas Chainsaw Massacre: The Beginning", where a man gets slowly eaten alive piece by piece and deep fried as he’s vainly chanting "Psalm 23" for protection. Already "Hogtied And Deep Fried" gets more interesting, especially around 3:10 mark, but "Necrotic Slut Chunks" is where Flesh Hoarder almost sounds like a different band, Fear Factory riffs with frequent excursions into every era of Death, more and more melodic and rhythmic, with almost hit-like riffing known from "Spiritual Healing" (Death) or "Cause Of Death" (Obituary), the former very obvious on "Counterweight Suicide" around 2:10 mark and it all comes both together and to a climactic conclusion on the fast Morbid Angel-esque "Burnt, Scraped, Dumped" with an epic ending and an unknown sample of people screetching atop witches being burnt at stakes cursing their captors while they scream condemnation over them.

While instrumentally and vocally "Homicidal Necrophile" is a great album, songwriting is remarkably inconsistent, almost as though they tried to make a brutal, pulverizing first half and a more melodic and cohesive second. This impression adds to the confusion as the second half is simply, weirdly significantly superior to the first. Why is this the case is beyond me but it lowers the score.

Overall, Flesh Hoarder is a promising new band who has years of hard work before them. Let’s see if they learn the lessons for the sequel which should, in all wisdom, follow the debut rather sooner than later.