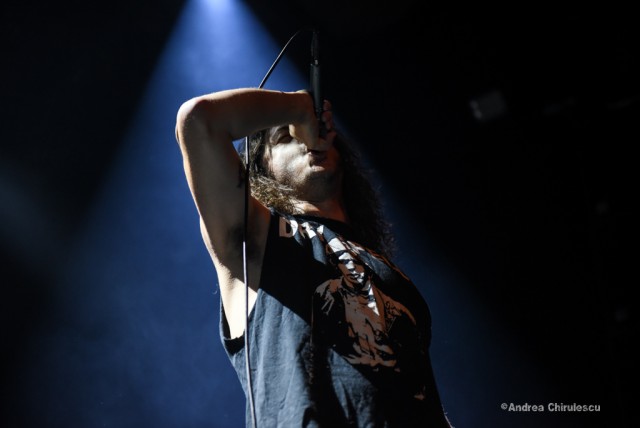 INTER ARMA  live@Rockefeller, Oslo
Photo by Andrea Chirulescu
I must confess that my ears where virgin to what Inter Arma was previous the concert. Being a fan of dark and low tones I regret Inter Arma had escaped my radar so far because it is this kind of music I use to relax. Previous the concert I was pretty curious as to what it was, but decided to check them out live first. They are from Virginia and according to their bandcamp their "music resists generalization and categorization." Well I can’t resist categorization so here it goes: they play Prog/Stoner Rock/Death Metal. A pretty good combination actually.

These guys have a good mix of different influences you got the pretty DM orthodox sounds from Covenant-era Morbid Angel which I find to be one of the most dense and thus pretty enjoyable for me. You get the prog parts that at times I find pretty Gojira. In addition there are some Southern rock and Stoner, but it’s pretty DM nonetheless. It’s something for fans of Ulcerate and Gorguts.

I find interesting the process of discovering new bands. I always take a look at the artwork first and it usually tells me something about the music. This time when I approached the merchandise stand, I saw that there was a fair amount of psychedelic, stoner-like shapes and forms in the artwork, but it didn’t betray anything Death Metal. After the visual inspection I settled up for it being something post-something. Since it was a rather post metal night. So it was cool when Inter Arma went on stage and brought the tonalities down and used a good amount of progressive riffs, some of them pretty airy and atmosphere inducing. While experiencing the band live I thought it was going to be fun to listen to it again and check how the live sound was compared to the album.

DEAFHEAVEN  live@Rockefeller, Oslo
Photo by Andrea Chirulescu
I was curious to know how well the atmosphere translated live. I found they succeeded in recreating the dense atmosphere they impregnated their album with. I do find them pretty organic, in the sense that there’s little use of synthetic adornments in the recording, so the experience live is pretty faithful to the album which is a nice thing.

I find live concerts with atmospheric bands of any genre pretty special, more like a musical seance. It’s like you are submerged in an additional musical layer. The venue, of course, has to suffice in order to recreate the sound of anything with atmosphere in it. It’s a matter of luck as well as there are many unforeseen predicaments that can ruin a good concert, but I think Rockefeller as venue is pretty good for such kind of bands. Other venues wouldn’t have done the band much justice.

Deafheaven was a pretty good show and professional as expected. It’s a band of contrasts live. The vocalist’s performance is pretty theatrical and looks more dramatic than what it’s intended probably because the other members of the band do not perform in the same manner. But it is in how different and how they just want to be themselves that the essence of Deafheaven is.

I see their music as a natural product of their place of origin. To me it’s not something super different or a rare blend, it’s just natural to their surroundings. I do like melodic hardcore which for me has influenced much of the melody we see in Californian bands that can be categorized as post-something nowadays. It’s actually nothing new or innovative since hardcore and metal in the US have crossed paths since the very beginning and will continue to do so in different ways and degrees. Not that I mean to say Deafheaven have taken something structurally from hardcore, it’s just the melody influences I’m talking about. Deafheaven is just a natural musical evolution. I do appreciate the melody style and the black metal vocals that they keep and that remind me of Summoning a lot actually.

There were pretty good songs from their latest album like You Without End which was a pretty beautiful song to experience live. If my memory doesn’t fail me I think they ended the concert with Dream House and of course we got Sunbather. But it was the latest album Ordinary Corrupt Human Love that was on the spotlight. It leans much more toward the rock side than the metal side tho, but the essence of their music is totally there. Their musical signature is there. I do like the fact they have crafted a distinctive sound by now, independent of where in the metal/rock spectrum they decide to journey. I did enjoy both the more BM influenced songs of the past and the new rock melancholic ala California ones. Ordinary Corrupt Human Love is a beautiful album besides it has references to Argentinian writer Cortazar, you don’t see that too often, so it’s going to be on my playlist for a while.