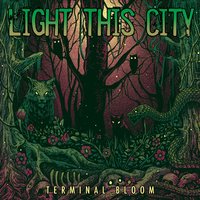 Light This City is a San Francisco Bay Area melodic death metal band with some thrash and hard core influences, formed in 2002 at the rising tide of the New American Wave Of Heavy Metal. Having released four albums they decided to split up in 2008, with the last show in 2010, but reformed in 2017. "Terminal Bloom" is their comeback album, heavily influenced by Darkest Hour while firmly melodic death in the Gothenburg tradition of Dark Tranquility, In Flames and At The Gates or even latter Arch Enemy with some serious Slayer-ing in between.

Lyrically, band’s female vocalist Laura Nichol explores emotional issues such as grief, toxic relationships and general disdain with life and humanity. In the opening "Reality In Disarray" "living is that sickening feeling of swaying over the edge, when naming the days feels like counting down", an intro recalling Shadows Fall’s "The War Within" album, for one of the best songs owing equally to Darkest Hour for melody as to Insomnium for riffs, Nichol "trusting others too much” and herself “not enough". Ben Murray (Drums) and Jon Frost (Bass) are the stars of "Grotesque Reflection" with an addictive opening hook, Light This City taking pages from Trivium and God Forbid for the deliciously melodic Steve Hoffman/Ryan Hansen (Guitars) interplay. But "Dormant Tide" takes the cake for the overall best track, As I Lay Dying riffs married to the Arch Enemy-ish/God Forbid-ian melody that will chase the previous track’s hook for primacy. At this point "we’re in the blackest depths of night" of explosive classic Warbringer/Slayer thrash although "tomorrow is a new day with new light and new life" in "Terminal Bloom" which morphs into a Unearth/Sepultura "Kiowas" instrumental bit which splits this short 30 minute affair in half.

The aggressive thrash marries melodic death metal with ferocious abandon of blastbeat gallore, Unearth and Gothenburg lock step with Darkest Hour, always as brutally rifftastic as beautifully melodic, Zack Ohren’s loud, full production emphasizing every detail and instrument for better enjoyment. "The Wake Of My Will" and "Neverlanding" both pay respects to At The Gates, Laura watching herself “become someone else with no idea how to stop it, grasping at straws, clawing up walls, gasping in the air that’s never there quickly enough" as she wonders "who will I be when she lands, or am I neverlanding?" Finally heavily Dark Tranquillity-ian closer "Wildheart" reveals "restlessness causing friction; friction releasing heat heat wasting energy; heart losing steam" Nichol wondering "why do we hold our breath? Is it to pause time?" as she keeps just enough air in her lungs to let her thoughts float so they won’t weigh her down for "how much time do we have left before we need to breathe again?", "Terminal Bloom" seemingly breezing by and appreciated more with every subsequent application.

Light This City really knocked the often stagnant melodeath current on its rear end by clearly taking clues from the most recent brilliant Darkest Hour’s "Godless Prophets And The Migrant Flora" album but I wish some of the tracks, such as the title track and "Extinguished" incorporated more hooks and melody as the second half of this disc appears slightly inferior to the first in this regard, especially to the first three cuts. As such, "Terminal Bloom" is a brilliant, explosive and impressive if imperfect comeback album that deserves to be played loud and proud.

Melodeath undergoing the aforementioned stagnation but for a few notable exceptions such as Omnium Gatherum, it is great to hear a comeback album that brutally rekindles the fire of seminal work of the three Gothenburg masters, especially with one of them a mere passing shadow of its former great self.

VOLA – Applause of a Distant Crowd