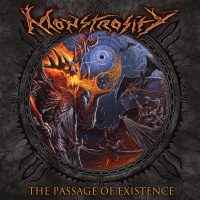 MONSTROSITY – The Passage Of Existence

Whether or not Floridian death metal powerhouse Monstrosity was named after Death’s song "Living Monstrosity" on the "Spiritual Healing" released in the same year Monstrosity was conceived, there is no denying the influence Chuck Schuldiner’s first love had on the founding drummer’s Lee Harrison’s project. As with Massacre, as Death evolved so, too, did Monstrosity, bassist Kelly Conlon recruited to Monstrosity for two albums (Millenium, In Dark Purity) because of his remarkable performance on Death’s seminal "Symbolic" (1995) album. Monstrosity’s original vocalist, George "Corpsegrinder" Fisher left after "Millennium" (1996) to succeed Chris Barnes in Cannibal Corpse, Jason Avery taking his place until "Spiritual Apocalypse" (2007) where Mike Hrubovcak (Divine Rapture, Vile, Abraxas, Azure Emote) took over.

"Spiritual Apocalypse" is one among my favorite death metal albums so I was anxious to hear some more material from these Floridians. Years passed and the band’s main guitarist even migrated to Deicide as I almost got used to the perspective of never hearing another Monstrosity’s song again when they released "Dark Matter Invocation" and "Kingdom Of Fire" singles heavily whetting my appetite for new material, the cover and the logo strongly reminiscent of "In Dark Purity" the additional appeal.

"The Passage Of Existence" shows Monstrosity at the hight of their craft, every member giving it an unquestionable 100%. In the interview with Tough Riffs magazine, drummer Lee Harrison, the only remaining founding member, said he was going for a mix of modern production with a more organic "performance" sound without sounding "pro-tooled", super quantized and sterile, and Jason Suecof’s Audiohammer Studio production mixed by Mark Lewis achieves exactly what he planned. You can listen to this record and admire just Michael Poggione’s masterful bass lines, especially on "The Hive" or "Eyes Upon The Abyss" or for Harrison’s own intricate drum patterns in "Proselygeist" and "Maelstrom" echoing Gene Hoglan’s "Symbolic" performance while marveling at his speed in "Radiate" or you could just delight yourself with the delicious Mark English/Matt Barnes rhythm and leads in "Dark Matter Invocation" and "The Hive", songs oozing with soon to be classic metal riffs that scoff at genre loyalty. Then there are the songs themselves which deal the traditional subjects of Apocalypse, death, corruption, injustice and war with fresh original structures.

The album starts of with one of the strongest tracks in Monstrosity’s career, "Cosmic Pandemia" evoking comparisons to Lamb Of God’s As The Palaces Burn/Ashes Of The Wake/Sacrament era for differences aspects throughout the entire album, as well as Death’s Human/Symbolic immaculate riffing and songwriting, with excellent melodic break and leads. Morbid Angel-esque "Kingdom Of Fire" already swings closer to classic thrash especially with the catchy classic Metallica or latter Death solo/transition in the middle and Slayerish ballad valley, while the calm ominous transfer to the next track seamlessly conjuring up the more deathly "Radiated", again, recalls Lamb Of God. Monstrosity also resembles Slayer or early Morbid Angel in the "is it still thrash or already death metal, oh who cares, it’s great metal!" approach while the third track will appeal to Suffocation fans and "Solar Vacuum" reaches downright black metal highs before it enters technical wizardry territory of Revocation interwoven with Peace Sells/Rust In Peace melodicism on "The Proselygeist" and my favorite, superb "Maelstrom" approaching Between The Buried And Me in songwriting mastery, to say nothing of the excellent "Dark Matter Invocation" for a mid-paced extremely catchy headbangers delight where every riff is killer. Both "Eternal Void" and "Century" lay on the straight Testament/Death Angel thrash so thick you’d think Monstrosity was Bay Area themselves and the closer "Slaves To The Evermore" may be the most progressive thrash/groove track since Machine Head’s "Spine" and not just for the similar melody. The album ends with great Middle Eastern leads, atmospheric keys, excellent melodic ending fading out with a sense of continuity with the opener "Cosmic Pandemia".

"The Passage Of Existence" is not perfect. "Solar Vacuum" and "The Hive" and "Eternal Void" (admittedly a bonus track) could have used more variety, more hooks, peaks and valleys, to borrow from Lee Harrison’s own description. Consequently, "Cosmic Pandemia", "Radiated", "Proselygeist", "Maelstrom", and "Dark Matter Invocation" appear to have more gravitational pull, but, really, there’s so much going on in every song that there’s nothing here even remotely approaching filler, bonus tracks included. Spin it four times and you’ll barely scratch the surface.

Overall, Monstrosity’s eight full length is a phenomenally written and executed death/thrash offering you can easily compare to the best of Death, Immolation (especially the last two albums), Morbid Angel, Obituary or Malevolent Creation (which Lee Harrison was once a member of), a near classic written all over it. While upon initial exposure it seemed to pale in comparison to "Spiritual Apocalypse", with closer encounters it exceeded it in every aspect, as great as it was, showing that Harrison & Co are far from calling it quits or retirement but only needed these eleven long years to birth something that is sure to re-solidify their position as one among death metal elite.

ÅRABROT – Who Do You Love