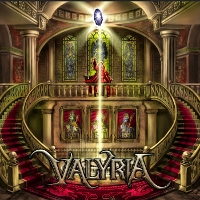 VALYRIA – Into The Dying Of Time

Valyria is a Canadian melodic death metal band combining Dark Tranquillity, Soilwork and Children of Bodom with a strong folk metal approach akin to Ensiferum without getting too obnoxious in either direction while sounding positively Scandinavian. Their name comes from a city in "A Song of Ice and Fire" series of fantasy novels by George R. R. Martin, and in their television adaptation Game of Thrones, as does most of their lyrical content. Into The Dying Of Time", their debut, was mixed by Diego Fernandez in Oracle Studios and mastered by Mika Jussila in FinnVox Studios. Valyria is heralded by the promoters as a fresh approach to melodic death metal.

While the sound of "Into The Dying Of Time" is heavily influenced by Children Of Bodom’s "Hatebreeder", it is nowhere near that level of production with Andrew Traynor’s (Guitars), Jeremy Puffer’s (Guitars), Cam Dakus’ (Bass) and Mitchell Stykalo’s (Drums) vocals high and everything else low in the mix, as though the vocals were the most important thing in Martin’s mythical Essos. Why do the guitars, drums and the keyboards sound as if they were fed through short wave radio, static and all, and why is Dakus’ bass audible precisely in two tracks (The Crossing, Floating World)? And why is production on the two instrumentals perfect?

Fortunately, the lack-luster production does not spoil the songwriting too much. The Mors Pricipium Est/Insomniumic "Steel Inquisition" and, my favorite, the Dark Tranquillitian "Haven"-like "Tome Of Shattered Vessels", are arguably best tracks, but the Dimmu Borgirian/Ensiferiumic "Of Sky And Sea", Omnium Gatherum meets Soilwork progression of "The Crossing" and "The Floating World" are also great if flawed exercises in finesse of skill and execution, growled and clean vocals (reminiscent of Trivium’s debut), Mitchell Stykalo punishing and superfast drumming and magnificent Traynor/Puffer lead duopoly with keyboard monuments recalling Children Of Bodom’s sophomore masterpiece or early Scar Symmetry. At times, songs such as "Of Sky And Sea" appear to self-indulgently lack substance and revel in either pointless instrumentation or dubious near-breakdowns, but, on the other hand, "Into The Dying Of Time" showcases incredible attention to detail and has an enduring replay value.

Apparently George R.R. Martin is not the only inspiration for Valyria as the references to the mysterious Ezekiel’s wheel indicate (Tome Of Shattered Vessels). Described in the Bible as a vehicle that could then have been regarded as God’s throne, and today as a spaceship or both, the wheel within wheel construct that raises and falls with each movement is one of the most fascinating concepts not only for Jews, Christians or Muslims of our time, since this over 2,600 year old design has no equals in today’s technology. Wearing their influences on their sleeves, Valyria references also Insomnium directly by mentioning "above weeping world", Insomnium’s third album’s title, as an idea in "The Floating World".

On the strength of the compositions, an alternative to the alternative, Valyria shows promise of what it is lauded to be, a fresh new blood in the progressively decaying melodic death metal, hopefully, with a better produced sequel. They just need more time and care.

PHANDROM – Victims of the Sea