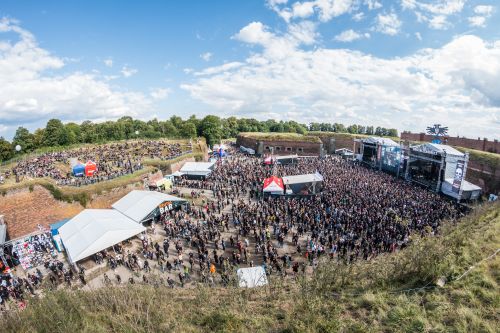 Brutal Assault 2018: Return of Behemoth, At The Gates, Converge or Ihsahn

Brutal Assault music festival is coming back to Josefov once again for its 23rd edition. One of the biggest metal festivals in Europe has confirmed the first bands. The complete lineup should traditionally include more than a hundred bands of various extreme genres.

Some of the best known names of metal extreme returning to the festival, mentioned Behemoth, At The Gates, Ihsahn, Unleashed or Broken Hope among others. Hardcore genre this time is represented by Converge, Northlane or Full of Hell. The festival in the middle of the fortress Josefov has traditionally built a program without emphasis on headliners. "Dramaturgy stands on a balanced lineup. Increasing attendance gives us feedback that fans trust the festival, "says organizer Tomáš Fiala.

After the success in previous years, a special "fourth stage" should return this year, where experimental and ambient music will be played. The Art-Brut-All Art Exhibition should also bea traditional part. Brutal Assault is one of the biggest metal festivals in Europe. It was created in the mid-1990s as a small event in Moravia and often changed its location. Breaking point came in 2006 when 7,000 people came thanks to the attractive program. Following year the festival moved to Josefov, where it stayed until today. The last edition of the festival, which was sold out in presale for the first time in history, attracted 20,000 fans from around the world.