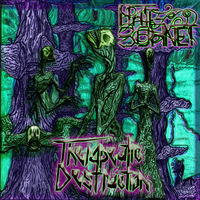 While it is still too early to identify this year’s best metal album, I am fairly sure I am reviewing the worst, courtesy of Nate Bohnet, his solo debut a way for the man to exorcise some personal demons. He plays all the instruments, vocals and even crafted this abstract cover Pablo Picasso would shoot himself in the face over. So God bless him for trying. I question releasing this mess to the public to be destroyed in a self-righteous criticism of the likes of Angry Metal Guy or Eddie Rattlehead. Yet Nate asked for it when he decided to release this so here it goes and I don’t hold back.

Imagine if Randy Blythe ’94 (Burn The Priest) and Angela Gossow ’00 (Arch Enemy) had a daughter who’d then married Chuck Schuldiner ’87 and they had a manchild and that child sang on Nate Bohnet’s album. Better yet, try to envision what the legion Jesus Christ exorcised in the Gospels sounded like. That might give you an idea of Nate Bohnet’s vocals and I am just talking the screaming/nu metal ones. When he utters them I am persuaded to prefer that "Therapeutic Destruction" were an instrumental album. Unfortunately, Nate also attempts to sing cleanly with high registers and most of the time he appears to be on the verge of passing out. When he utters those I am convinced that "Therapeutic Destruction" should have been an instrumental album. Interestingly, there’s a female guest, Micah Kutzley, either that or it’s a feminine sounding guy, given the first name, but he or she should have sang on the entire album. So much for the vocals.

As far as music is concerned, first to the good: some of Nate’s guitarwork, especially solos, is great and inviting. Occasionally, he attempts interesting structures and I identified 3/14 actual songs I can honestly say I enjoyed. "Breaking Through The Walls", "Sensation of Falling" (1, 2 punch openers) and "Hollow" are somewhere between Arch Enemy and Lamb of God, with cool melodies and riffs, songs which do not overstay their welcome and even would invite repeated listens if it wasn’t for those vocals.

Even the few and far tracks I considered decent could not make up for the total mess of the remaining material, ranging from mediocre to atrocious with some decent ideas but poorly and off-timingly put together. "Suicidal Illusions" and deathcore Pestilential "Blight of the Mind" are tied for the worst tracks, but the cringworthy Candlebox meets Extreme "Silence Falls", Biohazardic "The Infinite Struggle", the Coal Chamberic "The Painted World" (complete with a total Dez Fafara impersonation) and Slipknotty abortion "Serpent’s Tongue" are not far ahead, with everything else mediocre at best, leaving me looking longingly at the "skip" button on nearly every track. Most of the time Nate simply sounds like he made it up as he recorded it, which brings us to the production.

Since Nate Bohnet calls himself an engineer and he claims he mixed the album I have to believe him but most of the time he sounds as though he recorded someone jamming on the street through the window of his house. The sound level is turned up after the first track, fluctuates on most of the next ten tracks even to the point of near inaudibility, and drops back down on the twelfth, further fluctuating all the way until the end. And did we really need fourteen tracks for a sixty minutes (as in Black Metallica) of this torture?

As a producer of three different bands and four albums, not including his own, Nate Bohnet should have known better than what he presented on the "Therapeutic Destruction".That "this is the only way I can release it all" (My Liberation) I understand and support. But he should have recorded this entire album and then put it in a drawer to never be heard from again. A good guitarist who sings horribly and writes mediocre songs would be better off lending himself as a guitarist to someone else’s band. Then, having gained experience and skills, try again. Good luck.

TSJUDER – Throne of the Goat