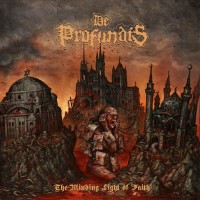 The fifth installment from the British artisans of fierce death metal shows them at their creative best. The band sounds incredibly fresh, powerful and inventive harkening back to classics yet refashioning them into their own art where thrash, death, black and melodic metal are indistinguishable from one another, with jaw-dropping skill, musicianship and originality, as well as fully fulfilling the intended lyrical concept.

The concept of “The Blinding Light of Faith” is one of the most interesting and skillfully presented lyrical anti-god(s) concepts I have encountered in metal music. The central point of this concept is “Bastard Sons of Abraham” an infectiously melodic tune in the vein of Death’s “Symbolic” or the now defunct Enforsaken, in which the Abrahamic prophecy is revealed to be “a malignant root giving rise to three vile weeds”: Judaism (Bastard Sons of Abraham), Christianity/Catholicism (Obsidian Spires, Godforsaken, Bringer of Light) and Islam (War Be Upon Him, Martyrs) “each staking its claim for sole veracity”, whereby a false paradigm of one faith distorted by human mind into a trinity of faith and god thus revealed. This faith, is not trust in revealed evidence which inspired Richard Dawkins, Bertrand Russell, Friedrich Nietzche, Karl Marx and De Profundis (Opiate of the Masses, Beyond Judgment, Bringer of Light), but blind trust in human prophets who inspire unquestionable trust in a revealed god, an entity you cannot see, hear, smell, hear or touch, which the main prophets of Abrahamic religion claimed to experience via five senses. I immediately awarded half a point for such brilliant and honest concept, which, regardless of your spiritual persuasion, forces you to rethink your own views, which brings us to the music.

Since music is the only true, incorruptible yet tangible means of knowledge, it is no accident that the “Islamic” tracks have the most Slayer influence in them, a clear nod to "Christ Illusion" and the madness of Jihad, where the guitar riffs of Carcass’ “Heartwork” emphasize the lack of heart in Islamic fanaticism which is bolstered by savage old school black metal breaks (Woe Be Upon Him) nor is it the coincidence that "Godforsaken" has the fear of God and security in God as two warring concepts in the believer’s tortured mind expressed through music that is both melodically moving (courtesy of old My Dying Bride/Paradise Lost references) and fear-inspiring (classic Death, Slayer, Megadeth) yet intricately woven together in a perfect unity. Nothing but scorn for “obey or die” Islam is laced with pity for Christianity (so, too, Judaism), so the “Christian” tracks are also sadder and more melodic. The inclusion of the frightening prayer at the end of a “Christian” track (Obsidian Spires) of the American Westboro Baptist Church praising the terror attacks of 9/11 and improvised explosive devices killing American soldiers in Iraq as revealed judgment of their god, Westboro, an American Christian Church sounding more like Al Qaeda than saints of Christ, right before an "Islamic" attack (War Be Upon Him), shows the connection madness between the Christian jihad and Islamic jihad in which the message is one of misanthropy disguised as love, god superior to man not because he’s love but because he is god and they are not. Finally, the tracks arguing for atheism from philosophical discourse (Opiate of the Masses, Beyond Judgment, Bringer of Light) happen to be the most eclectic, layered and multi-genre, De Profundis melding several into something that can only be called De Profundis metal, with light and dark interplay like god the creator and god the destroyer with all those conflicting human emotions thrown in.

Easily the band’s magnum opus, "The Blinding Light of Faith" forces the listener to pay attention to the music and lyrics for one unified message: trust your senses. De Profundis metal is not yet complete, as the first three tracks leave room for improvement but the band proves their point in word and notes with class, creativity and flawless execution that sets them apart from and above their peers. Very highly recommended.