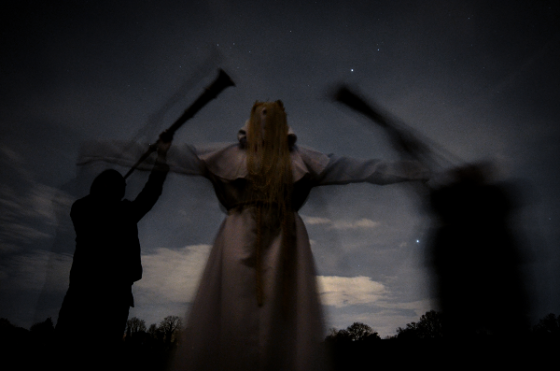 FIVE THE HIEROPHANT, whose debut full length album "Over Phlegethon" was released on Dark Essence Records at the end of last year, have revealed a new video for a second track from the album and announced new  live date.

The band had this to say about their new video: "Since our music is quite visual, image evoking, we have a treat for you to dispel boredom of the meantime. ‘Der Geist der Stets Verneint’ is ‘The spirit that negates’ – Mephistopheles from ‘Faust’. He speaks to us against the backdrop of possessed avant-garde ballet scenes and experimental films of Hans Richter".

It is this ritualistic aspect that FIVE THE HIEROPHANT bring with them during their live appearances, and fans will be able to see for themselves when the band embarks on a series of festivals and tours during 2018.
Confirmed dates so far as follows:
04 May: DesertFest, London, UK
15 June: The Black Heart, London, UK
29 June: TBA, Basel, CH
30 June: Rock in Bourlon, Bourlon, FR
16 Aug, Dark Bombastic Evening, Alba Iulia, RO
TBA Sept: Tour with DDENT
TBA Nov: Tour with THAW

More information about FIVE THE HIEROPHANT can be found on the band’s Facebook page at https://www.facebook.com/fivethehierophant/