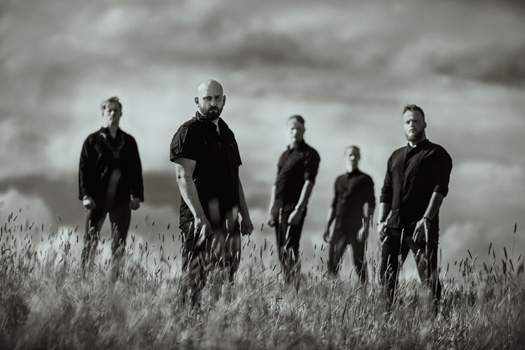 IN VAIN, Norwegian pioneers of progressive extreme metal, are releasing a new single from their upcoming “Currents” to be released on 26th January 2018 via Indie Recordings, more than 10 years after their grand debut. Without question, Currents is the definite pinnacle of In Vain’s career so far. Unique, innovative and catchy compositions with longevity that merge elements from many different genres, whilst still maintaining a carefully balanced dynamic. In Vain retains a principal focus on solid songwriting with cleverness and an original edge. Top notch musicianship in all ranks and a sublime guest performance on drums by Baard Kolstad. Add to that a stellar, organic production tweaked to perfection by Jens Bogren (Opeth, Dimmu Borgir, Katatonia, Devin Townsend, Kreator, etc) at Fascination Street Studios.

The album title, Currents, reflects on the colossal shifts and changes of our time. The present world is characterized by continental flows of people, traditions and cultures. Migration of people across continents and borders. Cultures merging. Dramatic shifts in lifestyle from one generation to the next. These are all currents – movements that distort old patterns, create tensions as well as new opportunities. These enduring shifts are some of the topics that In Vain addresses on Currents through a series of epic and monumental songs.

Currents also echoes In Vain’s musical landscape. Since its inception, the band has developed its own trademark sound through extensive exploration and seamless combination of musical genres. Currents goes to new extremes when it comes to further developing this approach. The music and lyrics of the album unite to form its own creative Current; A rich synthesis underlining the very idea of cultural and musical merging, and the album concept and artistic vision has been captured brilliantly by cover designer Costin Chioreanu (Paradise Lost, Enslaved, At The Gates, etc) and his stunning artwork.

The backdrop for the album has been a rigorous artistic and spiritual expedition across the world. Songwriter Johnar Håland comments: "Since the release of Ænigma we have been unknotting threads, followed traces, found disparities and drawn new parallels. In search of both lyrical and spiritual inspiration for Currents we embarked on a journey that took us across several continents. We have put the utmost of our hearts, souls and minds into Currents and we are sincerely grateful to everyone involved in this massive musical undertaking."Singer Sindre Nedland adds: "Through all the experimentation, In Vain has always had a solid foundation in aggression and melody, and Currents sees these two extremes united in a way that feels unforced, and pretty damn authoritative at the same time. It has been a long and hard process, but the result is everything we hoped it would be: Catchy, intense and unusual."

In Vain will release Currents in two editions:

NORMAL EDITION: This version consists of seven songs with a complete running time of about 43 min. This isthe same version that will be available on all digital platforms. The normal edition will be available in the following physical formats:
1. CD in 4pg digipak.
2. Single black vinyl in regular cover, with printed inner sleeve.

Pre-orders of "Currents" and new merch via https://goo.gl/oa2VnW