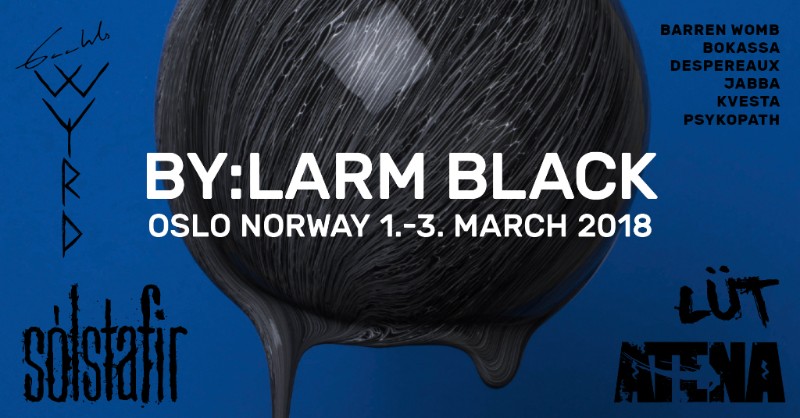 “They were just looking the other way. While everybody in the Nordics had their eyes on electronic streaming artists, metal and rock have been living a parallel existence – in rude health,” says Erlend Gjerde of Indie Recordings. He is running the latest addition to by:Larm, by:Larm Black, which first rolled out in 2017. Alongside Joakim Haugland, by:Larm’s Head of Programming, and Jarle Kvåle from Tons Of Rock Festival, he has built a new platform to facilitate a new wave of export-ready Nordic rock and metal bands.

The first edition was a massive success, attracting audiences in their thousands to witness stunning performances by bands like Blood Command, Taake, Fight The Fight and The Dogs, to name a few. Two days, two venues and 18 performances kicked off what looks like becoming a permanent part of the festival. In 2018 by:Larm Black is adding another day to its programme. Three days, two stages and 27 shows are in store for the second edition.

"We’re thrilled to be adding another day and 9 performances to the 2018 edition,” Gjerde comments. "Filling these venues with a total of 1000 people throughout the festival is no small task, but judging from last year’s turnout, there is a large and still growing interest for this music.” ”The feedback we received on last years event was overwhelming," explains Jarle Kvåle of Tons of Rock Festival. We have seen very high interest from both industry and artists alike, and the international industry seems very happy to meet their Nordic colleagues at this event. The interest or guitar-based rock and metal is definitely on the rise yet again, and it`s great to see by:Larm giving these genres it`s due exposure.

Head of Programming Joakim Haugland is also happy: “By:Larm Black was an ‘overnight sensation’ and established itself almost instantly as one of the most important Nordic meeting points for rock and metal audience and industry. We hope the expansion with yet another day to the festival truly show our intention and commitment to give rock and metal the place it deserves in by:Larm."

The demo acts that will perform at the Pokalen venue are already confirmed, but we are now announcing the four first bands to perform on the main stage, Vulkan Arena. One of Iceland’s most prominent acts the last few years, Solstafir, is coming, and so is the new band from notorious black-metal front man Gaahl. He`s most known for his work in previous bands like Gorgoroth, God Seed, Trelldom and Wardruna, but his new band; Gaahls Wyrd will no-doubt make an impact on the scene performing both new material and highligts from his career. One of the most promising rock bands in Norway these days are coming from all the way up north in Tromsø. Celebrated by Lars Ulrich on his Beats One show, Lüt has gone on to win nominations for "Best Live" at P3 Gold, and "Best Newcomer" at the Norwegian grammy`s. Just as Lüt, Atena as well is aband of the new generation. Despite their youg age they already released 3 studio albums, and their latest effort, Possesed received massive priase from both their fans and critics alike. Atena delivers a masive, groove-oriented sound, and with their unique use of classical samples they sound like no other act on the scene today!

When the annual by:Larm festival starts in March, these darkside genres will, like last year, infiltrate both Vulkan Arena and Pokalen. Here you can experience exciting seminars boasting both Norwegian and international music industry leaders, as well as 27 of the most exciting bands on the Nordic scene. More or less the entire Norwegian rock and metal industry and key international figures have already confirmed their attendance.

So who is by:Larm Black aimed at?
"by:Larm Black is for all artists with their fuzz-pedals set between six and eleven. by:Larm Black is for all the industry players who have searched in vain for their favorite artists in previous years’lineups. Now they can gorge themselves on everything from heavy and hardcore to black metal, punk and classic rock. We hope artists, industry and audience alike will approve of the initiative, look forward to seeing you in the pit!", concludes Gjerde.

The bands confirmed to play at by:Larm Black 2018 are: