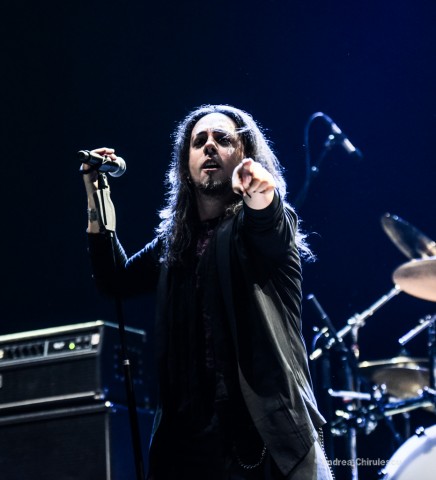 German hard rockers Scorpions looks back at a history of over 50 years and now in 2017 they embarked on a Crazy World tour that started back in September and so far has covered USA and the Russian Federation. After 11 days break, tour started again in Oslo, Norway and it was actually a good thing that we got to see the musicians on stage after a somehow long break as it felt like a fresh start. But maybe they are able to perform with the same intensity every evening, and in that case, lots of respect.

Before Scorpions took the stage and drove us back in time, a local heavy metal legend took over the big stage in Spektrum Scene in Oslo – TNT from Trondheim. They’ve been around only since the 80s and this evening it was rather special as they have introduced their new vocalist – Baol Bardot Bulsara whose blog states "I am a musician, actor, singer, songwriter and arranger who has been onstage for almost 20 years". Born in Buenos Aires and raised in Madrid, he does show his Latin side during the concert. I guess he was quite under a lot of pressure as having your debut concert on such a gigantic stage and in front of so many people is not for the faint of heart. First song can count as warmup, both for him, the rest of the band and the light guy who decided a very dark shade of blue is the good choice for starting the concert. I can imagine that TNT’s technicians didn’t have access to the multitude of Scorpions effects, but it would have surely been nice to see more details. Things got better with each song though, and the static intro was replaced by better mood on stage, more confidence and interaction between members. The new voice of TNT seems like a good choice as it is perfectly suited and powerful enough to deliver all the hits and even if didn’t stay until the end to confirm this myself, I was told that things just got better and better. And since TNT hasn’t released much in the past 7 years, there’s probably expectations of new materials that would put the new voice in its well deserved highlight.

TNT live@Oslo Spektrum
Photo by Andrea Chirulescu
A gigantic curtain covers the stage during the break, so that Scorpions many crew-minions can perform their tasks of clearing the stage for the upcoming performance. The drumkit is raised in the background, the ‘raiser’ is like a wide wall which, together with the gigantic background screen and the two side-stage monitor walls, is used for projecting a good mix of pre-programmed clips and live shots and effects. If I remember correctly ‘the wall’ was turned into a big stack of Marshall amps during one song. The whole logistics of the concert, from projections to lights to how the crew moved to do their tasks in between songs had a very German clock-work feeling in it. And it led to an impeccable show, so kudos to them.

As I was in the photopit for the first 3 songs, I was mainly focused on finding decent angles for capturing the action on stage and on running around the catwalk without tripping on anyone or anything. That’s when I noticed that the most active member on stage was guitarist Rudolf Schenker (the only original member) who is quite a sight with his torn apart jeans, his studded vest/jacket, big sunglasses and constantly changing facial expression. He’d pose at all times, jump or run and have a fantastic good mood. Probably most photographers ended up chasing him with their lenses.

Vocalist Klaus Meine has a certain cute shyness when he addresses the crowd as he doesn’t really have this heavy metal ‘mean’ attitude. But he seems happy to be in Oslo and he constantly states that, letting us know that if he tries to speak Norwegian his tongue would get damaged. So he sticks to a German accented English and fills in the breaks when his band members have to change guitars. But when he sings, that’s when the time travel is at its best. That’s the Scorpions voice from my childhood cassettes and when that voice, together with acoustic guitars, goes into ballad mode to perform ‘Always Somewhere’,’ Send me and Angel’ and ‘Wind of Change’, I just had to close my eyes, let the tears run and goosebumps do whatever it is that they do. It was a special moment for me, never ever dreaming I’d see these songs live. And it was even more special because for this acoustic intermezzo, the whole band gathered in front of the catwalk (must have been annoying for those in the first rows though, who’d only see their asses or who’d have to lean their heads way back to look at the huge monitors). Acoustic guitars (one in the shape of a Flying V) replaced the electric ones, a mini drumkit was quickly installed and a huge discoball got lowered from the ceiling, so that lights were projected towards it and the shiny ball would then reflect light back in a very cheesy looking scenario. Very suitable to the moment though.

SCORPIONS live@Oslo Spektrum
Photo by Andrea Chirulescu
After the emotional moments passed, the Germans performed a Motörhead tribute by playing Overkill. The soundguy must have forgotten to adjust the settings as the first drumbeats and guitar notes sounded as if they’d pull your guts out in they’d continue that loud. Glad it got sorted out rather quickly and despite the band’s enthusiasm, I don’t really think Scorpions is suited for such a tribute. It was quickly forgotten though during one of the show’s highlights – the drum solo, performed after the whole drumkit was raised few good meters up in the air and that led to an explosion of cheerings among the crowd. Speaking of crowd, I’ll make a parenthesis and mention that I was happily surprised to see quite a big number of youngsters in the audience. And that overall it was a much better responding and active crowd than few weeks ago at Uriah Heep. People sang along and clapped for more than one song. Glad to see it’s possible in Norway. Back to the drum solo, I really think it was a smart move to have each album cover added to a big mashup on the screens, leading to a final image of a drumkit up in the air with the whole band’s discography in the background.

Once the drums came back down to ‘earth’, it was time for ‘Blackout’ and a smoke releasing guitar that must have taken some practice to get used to. Another bonus points for this addition to the show. Big City Nights ended the show and it was followed by an impressive reprise of applauses and cheerings. So of course the band had to return for two more songs: ‘Still Loving You’ – another hair raising moment (which included a little a-capella snippet from ‘Holiday’) and the ending rocking tune of ‘Here I am, Rock you like a Hurricane’.

I’m really glad I got to attend the show. Scorpions were in great shape, good mood and were backed up by an incredible production. Well done to everyone involved and hopefully they can deliver at least at the same intensity for all of the many remaining shows. Also hopefully I’d get to see at least one more of them.