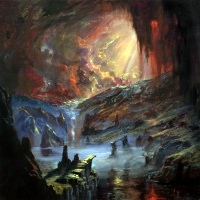 HORRIFIED – Allure Of The Fallen

Just when you thought that all was said and done in melodic death metal, that the numerous clones of In Flames and Dark Tranquillity have murdered one of my personal favorites genres, in comes this majestic, beautiful yet still fairly extreme construct. I have to admit that the brilliant introduction to the album that came with the promo, though probably written by the band members themselves, yet seriously whet my appetite and I did something I normally don’t do before downloading: I previewed the tracks digitally online. The intro to the promo called the music “towering melodic death metal” and it could not have been more accurate, for the music is huge, epic in places between the bouts of ass-kicking death metal that sits somewhere between The Chasm,  While Heaven Wept, Carcass and the first two In Flames albums, especially Lunar Space album. The melodies and the structures are simply breathtaking and I am already sad that this album probably will not be too easy to buy as a physical copy as it truly deserves to sandwich the likes of “Jester Race” and “The Gallery” while avoiding to sound dated.

Above all, though, this is MUSIC, six symphonies of true art that evokes a plethora of emotions in a listener. For example, my favorite, the closer beautifully named “The Promise of Solace”, like some type of tragic melodramatic mini-opera on the subject of utopia has become a soundtrack to a personal anguish, much like Mar De Grieses and Descend Into Despair have been a year ago for the prelude to the same affair. This is one of these songs I can listen to on repeat and it breaks my heart every single time, so much going on, so many twists and turns, the buildup to a huge finale, a mellow and excruciating dirge that has few equals in intensity. When the music accompanies and merges with your life you know it has affected you at the deepest level that makes you breathe easier in the midst of a dream murdered by reality. That’s ART.

Horrified are an incredibly, jawdroppingly fantastically talented band and they are experts at something that alludes so much of metal these days: CLIMATE. I don’t have to interview these guys to know that they have poured themselves 100% into this effort, they have given all they had to create a true masterpiece that can be enjoyed over and over with the law of diminishing returns completely abolished and annihilated. Much like Metallica on “Master of Puppets”, the Brits master the art of marrying the brutal and aggressive with gentle, emotionally epic and hauntingly beautiful while sounding both familiar yet fresh and innovative. Many have wondered if it were possible to still create melodies and harmonies that grip at the heart in metal and Horrified are a living thriving proof that the well is far from dry and high talent + great skill still equals mastery. Then there’s the production: both ancient and modern with truly HUGE guitar sound recalling latter Death in intensity and power, liberal borrowing of black metal stylings and My Dying Bride doomish misery as fully exemplified in the instrumental “Shorn”.

Want highlights? To these ears, besides “Promise”, “The Perceiver” probably best represents the best this fantastic album has to offer but the material is really even, without a single unnecessary note on the whole affair. Everything serves a purpose and the purpose is to create something that can be enjoyed by anyone who misses the old days of monumental melody in metal that required a patient and a dedicated ear without resorting to the so called “cheap melody” that’s dangerously borderline pop. To me, a first contender for the album of the year it is.