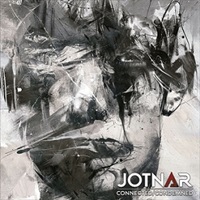 Five years removed from their debut "Giant" EP release, Spain’s Jotnar finally issue their debut full-length "Connected/ Condemned" for their new label Massacre Records. Good things come to those who are patient, and for this melodic death quintet the time couldn’t be more appropriate to remind the listeners of the best elements that took this sub-genre to headlining heights, especially those who had a lot of love for In Flames before they went into more American-ized pastures.

Relentless tempos and twin guitar harmonies carry the crux of the musical impact – keyboard pulsations added as a supplementary factor to the proceedings. Most will be hard pressed to resist the hooks for the title cut and "Missing Shadows", large sequences where the clean/extreme contrasts go hand in hand with the driving guitars and slithering bass action. The mechanized churn for "Broken Esteem" (with guest Speed Strid of Soilwork) takes the best of that aforementioned act and say "Colony" period In Flames into this swirling, mid-tempo vortex of aural combustion – Mario Infantes switching up emotions in aggression and comfort from verse to chorus and back again. Wasting no time between these 14 songs, most of the material hovers around the 4 to 4:30 minute mark, subscribing to a focused attack before moving on to the next idea. Guitarists Ben Melero and Elhadji N’Diaye present a thick rhythm foundation and can unfurl a mighty lead break or accent when called for – check out some of the precision present on "Live Together Die Alone" plus "The Loneliness Legacy" that will have you singing along when you least expect it.

Surprises include the band’s take on the pop hit "Say It Right", originally done by Nelly Furtado but given the Jotnar guitar heavy makeover, plus closer "The Portrait" that contains an alluring, feminine vocal assist by Jennie Lord when the arrangement takes a tranquil side turn. Many musicians may have moved onto more technical driven, progressive pastures – but the heart of melodic death metal still lives thanks to Jotnar. "Connected/ Condemned" takes the best of In Flames, Soilwork, and Mercenary to that 2017 level – let’s hope it won’t be another five years for the next crushing effort.