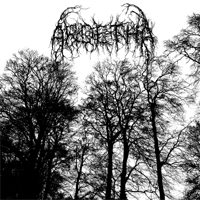 This rather cool 2-track EP was released just a few weeks ago by the atmospheric black metal horde from the UK known as Ardetha. Musically, the songs are epic and moody and yet strangely claustrophobic and dark. The sound of the EP is pretty raw and you can tell that it was recorded either on somewhat primitive equipment or simply recorded with the intention of having a fuzzy vibe to it. Either way, it kind of works in its favor. Very often black metal bands that walk the epic path go for a glossy production and a lot of punch, but when listening to "Ardetha" it almost feels as if these guys are undermining that tendency on purpose. The crude production provides the tunes with an organic and morose feel that makes for quite the interesting listening experience. The melodies and riffs are rather simple and straightforward, but with a hypnotic quality to them. I dig the murky vocals a lot.

Given that this self-titled release only contains two tracks, there is not a whole lot to go on here, but they do show promise. The band certainly has potential and I find the lo-fi charm and catchiness of "Ardetha" appealing. Check it out if you are on the lookout for a rather short black metal EP on Bandcamp.