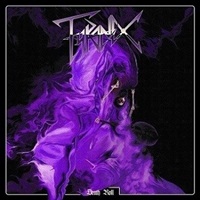 The third album from Sweden’s Tyranex continues the trail set forth from the first two records – accelerator-oriented thrash with wild shrieking vocals and occasional fits of blasting mania. Previously impressed by "Unable to Tame" from 2014, there should be little worry of any monumental shift from the quartet – they subscribe to a down to earth philosophy of hitting the ground running and leveling everything that lays in their path.

Guitarist Linnea Landstedt never wavers in her relentless high-pitch vocal acrobatics – speedy and passionate to make "Fight Them Back" and "Blade of the Sacrificer" standouts. It’s as if you are taking a three decade plus time travel machine back to the days of thrash/speed metal infancy, when bands plugged in, went full-force, and didn’t care about selling millions of records.  Certain instrumental sections lift the bass and twin guitar action to Maiden-oriented heights, the type of riffs where audiences sing in unison and clamor for more. Nino Vukovic and Linnea push and pull with axe riffs of fury on the Metallica-ish "Berget", something that wouldn’t have been amiss on the band’s debut effort. Tyranex probably appeal best to the ardent thrash followers, as many outliers will probably run for cover with the shrieking, high pitch melodies. But that’s just as well, "Death Roll" keeps the true at heart, and maintains 33 minutes of quality 80’s-style songwriting who can’t get enough of mid-tempo harmony transitions, thunderous drum fills, and heads down speed for the verses/choruses.

Another vicious, head-splitting, limb-removal act, Tyranex brings me back to the teen years when I couldn’t get enough of a faster, primitive sound. "Death Roll" won’t win style points for originality – but hits high marks all around for execution.