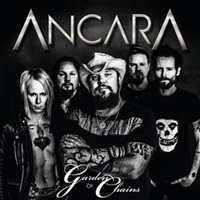 Shifting gears from a straightforward heavy metal act on "Beyond the Dark" into something more melodic in the alternative metal perspective for "Chasing Shadows", it shouldn’t really come as a surprise that Ancara’s follow up "Garden of Chains" drills deeper into the modern hooks and catchiness that appear to go for stronger commercial appeal. This fourth studio album contains eleven tracks that hone in on tighter arrangements, immediacy in terms of vocal and musical hooks, plus this added darker edge that can be somewhat industrial or modern rock-oriented, depending on the needs of the song.

The upbeat guitar hook for "Wake Up" contains a swinging rhythmic groove and incessant verse work – building to a grand chorus for the payoff (where you feel an airy 80’s synth-pop atmosphere). Keyboard swirls and distant computer voice effects during "Changes Come" make the emotional chorus that much stronger – Sammy Salminen hitting some lower to upper register sustained notes that will get audiences rising to their feet. It’s obvious from the first track to last that the band have taken a solid study of verse/bridge/chorus structure, using the work of bands like Nickelback, Shinedown, etc. to create catchy material, even when it’s in semi-ballad terrain for "Ending Mode" where the cascading keyboards and simpler power chords tug at the heart strings. It’s interesting to hear some of the sonic combinations Ancara employ – knowing when to keep things pulsating even at a slower, dance-oriented tempo and when to be more energetic – cuts like "Child of the Sun" and the title track two of the best in this regard.

If you’ve followed the band from the start, "Garden of Chains" may test your limits of likeability, but for those who enjoy artists that go with their heart and commit to change from record to record, this album has a lot to offer for those into vocal driven alternative hard rock with strong melodic flair.