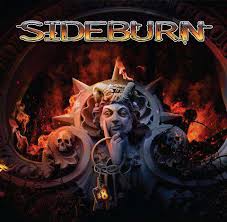 The Swiss hard rock outfit Sideburn will soon unleash this catchy and entertaining opus of theirs entitled "#Eight" through Fastball Music, and if groovy and bluesy classic rock in the vein of AC/DC appeals to you then you ought to check this album out. While AC/DC was the first band that came to mind when I spun this disc, you can tell that acts such as Cheap Trick, Rose Tattoo, Saxon, ZZ Top, Aerosmith, REO Speedwagon, and the likes have also crept into the band’s cool mix of high-octane, no-frills rock. There are plenty of swinging and memorable riffs, gritty vocals, crashing drums, fat and juicy bass lines, and a very solid groove from start to finish. If AC/DC and ZZ Top went out drinking beer together, starting bar brawls, and jamming with each other, then I think that sums up what Sideburn is pretty much about, musically speaking. It is simply impossible to resist the swing and groove of tracks such as "Get Your Ride on", "Long Road Paradise", and "Got to Move On". The cover of the immortal "No Class" (Motörhead ) is decent but does not really add anything new to the song. Still, it fits in with what Sideburn is all about.

My main gripe with "#Eight" is that we have heard all of this countless times before, so Sideburn brings nothing new to the table as such, but I honestly do not think that these guys give a shit about sounding original, and there is a certain charm to that. Sideburn wants to entertain and rock you by means of rather simple and direct music that hits you right in the face. Contrary to many other bands who try to pull off the classic rock style, Sideburn manages to sound convincing and powerful while rarely losing sight of what constitutes good songwriting. Despite a couple of clunkers and the lack of originality, "#Eight" comes recommended if you cannot get enough of AC/DC-ish rock with balls and attitude to it. I must admit that this one does the trick for me if I am looking for a good time and some straight-up rock of old with a raw vibe to it.