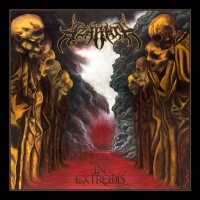 Polish blackened death metal band Azarath blew me away with their last album, "Blasphemers’ Maledictions". Next to Behemoth with whom it shares the drummer extraordinaire Zbigniew Robert "Inferno" Promiński, Azarath is one of the greatest death metal bands ever to come from my old country. Their technical and songwriting skills are actually superior to even Behemoth and the expectations for the new  album have been high. I am happy to announce that, while not surpassing the predecessor, "In Extremis" does not disappoint and will likely garner them even more following than that which they have acquired with "Diabolic Impious Evil" or "Blasphemers’ Maledictions". The material has become a lot more extreme as if true to the album title, yet the songs, with a couple of exceptions, are multifaceted and the boundaries between death, black, doom and even a bit of thrash metal are smoother, at times disappearing. Nor did Azarath forsake the melodies but made them more pronounced and monumental. The biggest influence still remains Behemoth but Morbid Angel, Krisiun, Rebaelliun and Immolation with some Mithras for good measure can also be heard while songs often sport a very Panteric groove all of which contributes to greater listenability and replay value. Make no mistake, though, this is extreme metal and your first spin will likely give you a headache. Overall, though, Azarath can be talking about having their own unique style which cannot easily be categorized.

The first five tracks: "The Triumph of Ascending Majesty", Let My Blood Become His Flesh, Annihilation (Smite All The Illusions), "The Slain God" and "At The Gates of Understanding" are pure perfection. "The Triumph" starts like Behemoth "Satanica" which is cool since Inferno is  in both bands, a track generally in an epic Behemothian melodic convention when slower, with Panteric breakdowns, but when fast it’s chaotic and evil like Rebaelliun with a cool atmospheric ending. "Let My Blood" recalls Morbid Angel, Yattering and Immolation with early Machine Headian/Immolation squeals, with great powerful riffs which they repeat later, guitar leads like dialogue of two demons, solos similar to Slayer "Reign in Blood", still frantically fast. A slightly slower "Annihilation" has Chaos A.D. Sepultura-like riffs for a catchier and more varied delivery leading up to "The Slain God"’s Behemothian thoughtful break from incessant speed if only a brief one, adding atmospheric ritual chants and recalling Morbid Angel’s "World of Shit" for the slow verses and fast chorus and ending, while it actually is at times the fastest so far. This sort of reminds me of Nile with its Cthulhu melodeclamation and for some sick reason of Army of Lovers "Crucified" for the drama, the latter as much to do with metal as Donald Trump with compassion. That weird association notwithstanding "God" features some excellent fresh riffs the likes of which are hard to spot in most of death metal these days. "At The Gates" is the most varied track so far, with violin and keys but hardly forsaking the lightening fast technicality, ebbs and flows making me think it is safe to say we have a perfect album on our hands.

So far so absolutely perfect. Material is brutal but very memorable and infectious, fresh riffs, plenty of balanced melody and just when the brutality and speed gets overwhelming they slow down or get atmospheric, all the ingredients for a perfect extreme metal album are there and there is no distinction whatsoever between death and black metal or even thrash, all is one. But it has only been the first half so let’s take a break and come back in a few to take in the remainder with fresh ears. By the way, note to reviewers, put on good headphones and turn DOWN the volume to barely listenable then add a little volume so as to grasp all intricacies and details at once and faster. The human picks up LESS at higher volumes, trust me, tried and true. Then when you have "learned" the album, blast it to your preference.

After listening to a few other albums and watching a few episodes of "Beavis and Butt-head" we are ready for round 2. While I would not call "Parasu Blade" and  "Sign of Apophis disappointments, I find them to be a little underwhelming compared to what came before. "Parasu" may be still thunderously heavy and fast but is short and based around fewer riffs. Before you get into it it‘s over. Admittedly, "Sign" is the better of the two, ironically not easy for comparisons with respect to influence except for Mithras and I do like how Azarath breaks into a riff salad but in an orderly fashion, staying on one riff just long enough to make a point, a very classical structure like Wagner’s opera, just not nearly as memorable as the first five songs. Now, "Into the Nameless Night" returns to the greatness presented before, Morbid Angelesque riffing alternating between "Domination" and "Formulas Fatal to the Flesh" with more Ade melodicism and Panteric groove as well as particularly audible bass, and by the time "Venomous Tears (Mourn of the Unholy Mother)" rolls in with those thick riffs we are happy again, especially since that Ulceratian guitar lick at 1:30 seems awfully hard to reproduce, for, overall. one of the best tracks on the album, featuring the best riffs since David Vincent left Morbid Angel. Like Behemoth and Morbid Angel before them, Azarath chose the seemingly slowest track at the end, a tar black interplay between atmosphere and groove and insane speed with a truly epic ending.

The second half of the album not as memorable, with a couple less intricate tracks that, while still heavy and aggressive, just don’t grab me like the first five, the quality of the remaining three redeems it. "In Extremis" is not a perfect extreme metal album but an excellent effort regardless. The musicianship is tight and technical, riffs fresh and most of the material memorable plus Inferno steps out of himself and stands aside to watch himself play whilst still playing. A worthy follow up to "Blasphemer’s Maledictions".