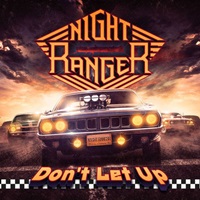 Long-time Night Ranger fan here – grew up in the 80’s when "Sister Christian" blared from radio stations coast to coast, and "Don’t Tell Me You Love Me" would be an early MTV staple. Even after the ballads won them a platinum plus sales base, songs like "A Touch of Madness" and "Color of Your Smile" fit my tastes much more, as the band combined a great hard rock base with vocal harmonies like few others in the scene. They’ve had a good run since the Kelly Keagy/Jack Blades/ Brad Gillis triumvirate have been back together, releasing a series of solid records in the past decade like "Hole in the Sun", "Somewhere in Calfornia", and "High Road". "Don’t Let Up" features another lineup change, as guitarist Joel Hoekstra got the call to join Whitesnake, and Keri Kelli who subbed for the band for a couple of stints became the new second guitarist – and for some reason, the varied approach and throwback influences make this record somewhat inconsistent for full appreciation.

First the good – "Somehow Someway" opens the record in traditional Night Ranger glory – the main riff and driving Keagy drum groove plus supplementary harmony-laden chorus showcasing all facets of the band’s abilities, while "Say What You Want" brings back memories of "You Can Still (Rock in America)". The ballads "We Can Work It Out" and "Nothing Left of Yesterday" contain acoustic passages and melodies that possibly reach into their childhood influences like The Beatles and The Moody Blues – while not recycling familiar "Sister Christian" or "Sentimental Street" terrain. Brad Gillis is still an electric guitar master – capable of tearing your head off with a fiery break while laying down a proper foundation (check out his concluding measures of "Nothing Left of Yesterday" for proof). And you would be hard pressed to not find many melodies/harmonies that roll easily off the tongue because Jack Blades and Kelly Keagy know how to sound full and smooth as those West Coast sunbeams burst from the skyline.

Conversely, you have certain cuts that seem more appropriate for Bowling for Soup in "Running Out of Time", or even Joe Walsh on the honkytonk-ish "(Won’t Be Your) Fool Again" that just sound contrived for stretching the band creatively, without serving up anything interesting. When this happens early on the record – or midway through – it can make full passes tough to swallow, or lead to shuffle play. Far be it for me to place the blame in one area – it’s just disappointing considering the strength of the previous "High Road" for Night Ranger to stretch in other territories where capturing newcomers is less likely than losing long-timers.

Overall, "Don’t Let Up" tips more to the good than bad, it just fizzles instead of cranking at ten all the time.