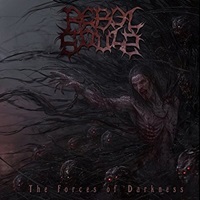 REBEL SOULS – The Forces of Darkness

The essence of death metal has always been about brutality – inhuman growls, sick riffing, and this relentless appeal that cuts to the heart of the underground. German duo Rebel Souls live for the cause on "The Forces of Darkness", an eight-track assault that comes out swinging and rarely slows down before the next blasting sonic salvo launches. The riffing and lead breaks slay in the right At the Gates/ Slayer sickness, while occasionally veering into Morbid Angel/ Krisiun speediness – vocally emulating Amon Amarth with a touch more clarity. Session drummer James Stewart (Vader) delivers a blast filled performance on "Dark Forces" and "Descent" – while Thomas Plewnia layers those death/blackened riffs as an axe expert should. When he chooses to be more controlled at a mid-tempo level for the early stages of "Fourfold Wrath", it gives the subsequent scattershot speed action that much more power and aural release.

It’s nice to have a straightforward death metal effort like "The Forces of Darkness", where Rebel Souls aren’t trying to be the most intricate or technically profound band. This one speaks to those who miss the early period of the genre, when thrash was mutating into death and musicians delivered their parts for the sake of memorable songs. "Doomsday" which ends the record has a sick, doomy start that stirs the insides before the growls and blasting mania overtake the universe – a fitting ending to a record that will hit home with most underground metal mavens. Curious to know what things would be like if they are able to secure a permanent drummer and take these songs onto stages far and wide.