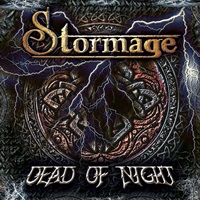 "Dead of Night" is the third studio album from German metal four-piece Stormage, who have been together in one form or another since 1996 under a different moniker as Anthem. Changing names in 2003, they deliver a powerful style of heavy metal that straddles classic principles while maintaining some modern production bite and attack. Taking a ten-year break between albums to collect other experience in side projects, the 10 songs possess distinct traditional traits in terms of pacing, finesse, and Teutonic power, while using a few modern tricks and effects to heighten the heaviness of certain passages.

Guitarist Heiko Heseler will never be considered an upper echelon belter in the Kiske/Tate realm with his melodies – his natural mid-range grit and charm fall more in line with say Peavy from Rage when you check out songs such as the mid-tempo "Heretic Enemy" or anthem-oriented "In the Line of Fire". Drummer Vaseilos Georgiou lays into his drums and double kick like a madman right out of the gate for "Instinct to Defend" but can also be very reserved and tasteful during the ballad "Victims Eyes". Overall Stormage delivers their riffs with power and control – similar to much of the Brainstorm or Rage catalog, while adding in a bit of aggression and tenacity to stir the pot. Acoustic guitars or delayed vocal effects and narrative/soundbites give your ears some dynamic relief, but overall the band perform in this heavy metal pocket that should make this material easy to translate to the stage. Gaining assistance on the production end from Seeb Levermann of Orden Ogan, the sound hits sharp, tailor-made for cranking up to 11.

Stormage in the end deliver a respectable product in "Dead of Night" – sure to satiate many heavy metal followers, but also seems to sit in that tough category of not maintaining enough hard hitting, distinctive qualities to stand out against the hundreds of other releases.