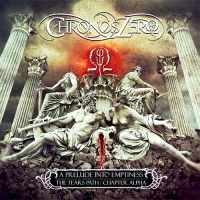 Is there such thing as too much progression? Well, sure, that’s part of what’s wrong with the world today: too much progression can be as ill-fated as too much conservatism. But is that true for music? Chronos Zero is proof positive that yes, it is. It shoots for proximity with Symphony X, Nevermore and Evergrey but misses by a long shot. But the album title is spot on: Chronos Zero music is huge sprawling, ambitious yet cold and hollow as Donald Trump’s heart.

The songs, if one can call them songs, never seem to go anywhere. They are long and almost completely deprived of melody, hooks or even riffs per se. Djent squeezes the life out of basic structures as if someone paid this band per note of inclusion. This album is simply boring, good old fashioned boring. Granted, this is their debut but even as such is a bloody mess. The only song that moved me out of the stupor was "Sight of Damnation" and only to about the same degree as Lisa Kudrow reminded Hank Azaria of Vladimir Lenin in "Friends": certain angles.

I’m going to listen to "Hollowlands" (the follow-up) and I would love to eat my words upon exposure to the new improved and most importantly interesting Chronos Zero. As for this, it gets 3/6 as any work of mediocrity because it’s not terrible it’s just not good. Kinda like purgatory. Yes, it’s exactly like that…I remember now.