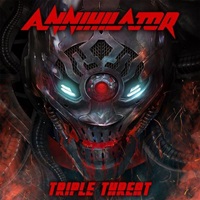 Guitarist, songwriter, producer, and leader of Canadian metal band Annihilator Jeff Waters does not sit idly by as members shuffle in and out of his group. Back to taking over the vocals again, "Triple Threat" is a double CD/ single DVD outing (although we did not have access to the visual contents) consisting of a live show plus a full acoustic set, with track listings that differ from each to delve deep into the band’s rich discography.

Disc one is the electric live set in front of a festival audience – bringing 11 songs old and new to the audience. It’s hard to dispute the vitality of "King of the Kill" as an opener, Jeff immediately gaining approval through screams and chants from the faithful metal hordes. Relatively recent numbers such as "No Way Out" and "Creepin’ Again" gain early set list entrance, as most of the tracks stick to the tried and true highlights, including "Set the World on Fire", "Never, Neverland" and of course "Alison Hell". The between song banter can be a little humorous, but the band take their craft seriously, proving their vitality to many in the power, melodic thrash and groove metal scene. Most will bounce, swing, and sway to the energetic riffing and spirited lead breaks within, and it’s a tight hour long start to this package.

The second disc is acoustic interpretations of Annihilator material – challenging and creative all the same as most metal bands would fear taking away the effects and distortion to leave the songs very bare and naked if you will. Jeff knows what he’s doing for sure though – tackling everything from the complex in "Stonewall" from "Never, Neverland" to many cuts from "Set the World on Fire" like "Sounds Good to Me", "Snake in the Grass", and "Phoenix Rising". Jeff’s voice comfortably handles the restraint necessary to allow the acoustic guitars and bass plus vocal harmonies from the band members to carry the load. Once again, his personality and playfulness shines during a lot of the between song breaks – proving he has the right attitude about giving the listener a cool experience while having fun in the process.

Ardent collectors and long-time Annihilator followers will enjoy "Triple Threat" the most – but this multi-disc package also can be a primer for those curious to know the many sides of Annihilator.