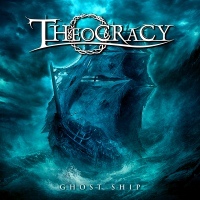 Theocracy is a Christian progressive power metal conveying the Gospel of Jesus Christ with taste, maturity and excellent story telling. Already on their eponymous debut, which the singer and guitarist Matt Smith recorded entirely by himself, Theocracy showcased exceptional amount of compositional talent, ability and skill further showcased on "Mirror of Souls". Subsequent "As The World Bleeds" signaled expansion of horizons but "Ghost Ship" truly blurs the genre lines while never abandoning the power metal. Theocracy is hardly preachy but rather deeply relates to the human experience as any moving secular piece normally would in a world that inspires nothing short of daily hopelessness.

"Paper Tiger" is a perfect opener as if straight from "Keeper of the Seven Keys" Helloween, a multiverse, highly infectious tune that argues "we live lives fit for a king and most of us don’t know real suffering", followed by the title track recalling Dream Theater’s "Pull Me Under" (Images and Words), Queensryche and Iron Maiden, Matt’s vocals easily compared to James LaBrie. Excellent "Rust in Peace" – like thrashfest of "Wonder of It All" blends with two equally gorgeously melodic choruses while touching death metal (my favorite track) and subsequent "Wishing Well", an Evergrey/Angel Dust themed track spins "Walls of Jericho" Helloween in a Megadeth meets Revocation fashion. Beginning like In Flames "Free Fall" music box, "Around The World and Back" an AOR/Def Leppard gem has probably the best chorus on the album. The production of Theocracized Studios is top notch, everything in the right place, explosive, punchy, bassy and melodic but also raw, fast and heavy so that we can keep our jaws firmly on the floor for Matt Smith’s unbelievable vocal performance particularly toward the end. Incredible pipes on that guy.

Overall, the second half of the disc, while solid, does not seem as impressive as the first. "Stir The Embers" showcases Matt’s vocal prowess while echoing Iron Maiden’s "Somewhere In Time" around a heavy groove metal riff, while "A Call To Arms" Dream Theater’s "Awake" with a Megadethian "Symphony of Destruction" riffing (Countdown to Extinction) and a like fantastic solo, nevertheless strikes me as the weakest link in this chain. "Currency in the Bankrupt World" recalling Annihilator’s "Phoenix Rising" (Set The World Afire), on the other hand, is lyrical and sonic magic again with a chorus so uplifting you’d think God Himself wrote and sang it, to wit "don’t you know when hope is gone, looking for a reason just to carry on, to lay that burden down you’ve carried way too long, and holding on, when the dreams foreclosed and life is overdrawn, there’s a currency left in this bankrupt world, after all". "Castaway" is pure fast Dragonforce power metal, while some of us can definitely relate to "don’t be afraid, this world is not your home…if the world hates you remember it hated me too" lyric. Theocracy closes the proceedings in a very operatic progressive Blind Guardian/Iron Maiden tradition complete with acoustics that recall Marillion off of "Seasons End", lyrically a Biblical tale of redeemed mankind after the old earth and heaven have been restored and replaced whereby Matt Smith exclaims "Glory, glory, hope is alive…what an ending to the story!", proof that Theocracy are truly expert composers.

Never repeating themselves while continually expanding their sound beyond progressive power metal, Theocracy hits another home run with "Ghost Ship", a worthy follow up to the thoughtful and magnificent "As The World Bleeds". Matt Smith’s voice is so full of conviction and hope amidst the despair over broken and corrupt world that one can’t help but sing along in one’s heart. And if you like this album, do yourself a favor and pick up "As The World Bleeds" as well. You’ll be glad you did.