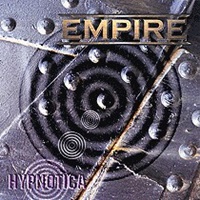 The debut album from international hard rock band Empire starts with German guitarist Rolf Munkes, who played in acts like Majesty, Crematory, and Razorback through the years. "Hypnotica" originally came out in 2001 through Lion Music- Pride & Joy Music is reissuing the Empire back catalog, starting with this debut album, tacking on three bonus tracks to make the package slightly more attractive. Lance King handles the bulk of the vocals, with Marc Boals singing on "Into the Light" and "I Will Always Be There" – Neil Murray on bass, and Gerald Kloos on drums as well as special guests on certain tracks from Anders Johansson, Don Airey, and Stefan Kaufmann.

This is straightforward melodic hard rock that contains Rolf’s solid, neo-classical lead break skills and high octane vocal work to match the proceedings. Songs like "Fool in Love" and "Shelter" seem tailor made for Lance’s aerial falsetto range, Tony Harnell from TNT coming to mind for sure – while Marc’s previous work with Yngwie comes up on his two performances where there’s a bit more power/epic-oriented bite going on. Of the three bonus tracks, "Dogtown Shuffle" contains the most potent riff and seductive tempo, very reminiscent of classic Whitesnake with more of a Ratt-like scat closing section in the vocals. Rolf as a guitarist has the proper arpeggio runs and technical prowess- but somehow also injects a lot of Neal Schon-like AOR finesse in certain songs, "Bad Bad Boy" being a very commercial number that could have easily hit the radio charts if released during the 1980’s.

Considering the wider landscape of appeal for this genre thanks to the internet, Empire deserve a second look for certain. "Hypnotica" contains rich songwriting and solid hooks to appeal to most in the melodic hard rock platform.