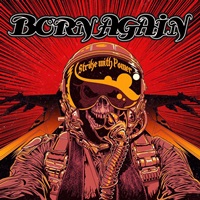 A relative newcomer in the French hard rock/metal scene, Born Again started in early 2016 and quickly issue a debut full-length "Strike with Power". Their sound has a lot of classic hallmarks in terms of the incorporating memorable, quick hitting guitar hooks and groove elements influential in putting Black Sabbath, Judas Priest, and Thin Lizzy in the hearts of millions over the years.

Certain riffs even come off as distant cousins of familiar territory- the opening passages to "Preachers of the Night" taking on a lot of "Sweetleaf" / Black Sabbath charm, while a cleaner "Live Wire"/ Mötley Crüe feel penetrates "Angel in Black". As a singer, Thierry has a gritty, rough around the edges aspect to his delivery, almost like Chris from Grave Digger, which could put certain listeners off while others will be happy to have such a down-to-earth frontman. Because of this, Born Again possess this bar boogie finesse that makes "New Generation" and the culturally, rhythmic "Wings of Hate" as easy to go down as smooth as your favorite alcoholic beverage. Keeping the album under 40 minutes allows for multiple playbacks in a rather tidy time frame – but for some reason, "Strike with Power" contains more average songwriting than any standout elements to elevate the band to a higher following. Even tackling an "Overkill" classic like "No Class" from Motörhead, you can tell the band aren’t quite able to capture the raw intensity and appeal of Lemmy and the boys to make it a riveting cover.

The fundamentals of playing ability are there – unfortunately the lackluster execution puts Born Again in that ho hum / heard it all before platform that makes most reach for the originators rather than establishing a fresh take in the current scene. "Strike with Power" swings and misses as a result.