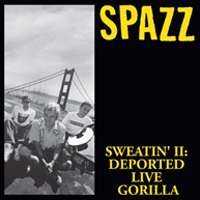 Next up we have a reissue from hardcore/powerviolence act Spazz. Funnily enough Tankcrimes released Sweatin’ I & III in 2016, so this one is slightly out of step in the chronology, but it offers up all of the same fun as last year’s releases. Sweatin II is taken from various spilts over ‘95 and ’96, remastered, polished and rolled in glitter.

The whopping 35 songs on offer average about 1 and a half minutes each in length, so expect the usual movie soundbites (kung fu especially) and rumbling basslines that give way to a spastic blur of speed. One thing that can often happen when a band relies so heavily on movie intros is that they can become boring with repeated listens.  Spazz generally make good choices and their funny little snippets usually avoid this trap, but not so much this time around.

For my money Spazz are one of the seminal acts of this genre. For sheer violence, they are hard to beat and it is fantastic that the good folk at Tankcrimes are bringing them to a new audience (or supplying those who lost touch with the band). Sweating II is not without its faults though. Firstly, we have the abovementioned intros. Next we have the fact that some of the breakdowns and slower parts just go on too long this time around. Spazz are most effective when they kick in the door and break your jaw – not when they hang around to drink your Pepsi. Then we have the 9 minute track Total Meathead Fuck. This completely tears the arse out of the middle of the recording. It doesn’t add anything good at all and takes us away from where we want to be.

So there you have it – as good at the peak as anything Spazz offer but with a couple of small issues. If like me there are times when you struggle to find something heavy, fast and crazy enough to match your moods, then why not Spazz out?