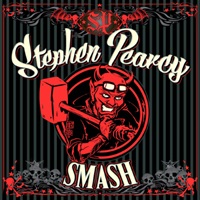 The fourth solo album from Ratt vocalist Stephen Pearcy, "Smash" contains a diverse selection of melodic to modern hard rock tracks. Some of the material takes on a bit of a 90’s sheen, such as opener "I Know I’m Crazy" and "Dead Roses", while the comfortable bluesy throwback elements come up on "Shut Down Baby", a number that easily assimilates to older Led Zeppelin/Aerosmith followers. The performances keep the proceedings lean, mean, and focused, the guitar hooks and melodies immediate for maximum brain retention.

A lot of Stephen’s known personality and playfulness shines on the swinging "Lollipop" – the one word chorus giving off a bit of a psychedelic Beatles feel while guitarist Erik Ferentinos fires off an explosive lead break. The slide guitar and acoustic/electric melding for "What Do Ya Think" is one of my favorites – perfect for Stephen’s range as the rhythm section lays back into this classic rock groove, a number that many will crank for their weekend barbeques or cruising with the top down on a sunny summer day. The album ends with a ballad "Summers End", reaching again back into the 1970’s for pacing and atmosphere to close the record on an emotionally engaging arrangement.

While matters get sorted surrounding Ratt these days (look online to see the latest developments), it’s great to hear "Smash" as Stephen surrounds himself with a solid lineup and fires off a 13-track album that should satiate the legions who desire new music from old favorites.