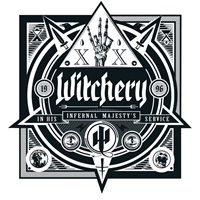 WITCHERY – In His Infernal Majesty’s Service

The sixth album from Sweden’s Witchery contains a few new members in the six-year break between efforts. Welcome vocalist Angus Norder and drummer Christofer Barkensjö to the fold – joining long-timers Patrik Jensen, Richard Corpse, and Sharlee D’Angelo on "In His Infernal Majesty’s Service". Once again dishing out thirteen spitfire cuts of blackened speed/thrash metal, it’s all about the rough and raw spirit that keeps the listeners happy and coming back for more. There’s something primal about the chugging riffs and locomotive tempo train that rolls for "Netherworld Emperor", while the follow up "Nosferatu" just oozes early Slayer meets Venom, especially through the acidic spitfire deliver Angus employs.

Keeping the focus on lean and mean arrangements, you never feel any aural fatigue as Witchery know how to vary the attack while still being aggressive throughout. Just as the furious blackened efforts like "The Burning of Salem" and "Gilded Fang" come, the band backend things with more controlled fare such as "Eye for an Eye" or the Motörhead-like "Empty Tombs" that showcase a groovier, musical interplay aspect. Considering this is a secondary project to other primary activities (Sharlee busy in the Arch Enemy camp as bassist, Patrik as a main songwriter and guitarist in The Haunted), it’s nice to hear this quintet pull together material that reaches back into the early aspects of speed, thrash, and punk while putting that rougher exterior aspect to the proceedings.

Many still love the first two albums "Restless & Dead" and "Dead, Hot and Ready" the most, but for my money "In His Infernal Majesty’s Service" ranks on par with those early Witchery records. Maybe you’ve lost sight of their work, this is a great place to get reacquainted.

DISTANT SUN – Into the Nebula