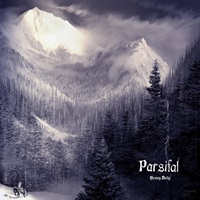 Hailing from the fjords of Norway and the dark forests of Sweden, Parsifal have been in existence since 2012, releasing their debut album "Here from the Past" a year later. "Heavy Duty" is the follow up, and my first experience with the power metal group. The band straddle the line between conventional Helloween/ Freedom Call -inspired anthems and faster, uplifting Dragonforce-ish riffing and speed – although the vocals fluctuate between mid-range and banshee/falsetto deliveries. As a result much of this material contains the fiery, brimstone passion and energy necessary to appeal to the younger crowds, and probably elicit the sing-a-long unison audience participation Parsifal desires at your favorite watering hole.

At 11 songs and 55 minutes, the guitars and keyboards dominate the hook landscape musically – brighter chord choices for "One Wish" or the majestic, march-oriented "No Man’s Land" early highlights. An epic "The Seven Sorrows" appears mid-album, throwing everything from extreme blackened/symphonic parts to choirs and serene, atmospheric melodies into its 8:44 framework – hopefully an area Parsifal embrace and expand upon on future recordings. The struggle for full recommendation lies in the wavering abilities for keyboardist Oscar Pelin on the vocal front. When he chooses to ascend to the stratosphere during the choruses or trailing notes – he sounds very uncomfortable, not confident to hit those bird call areas convincingly. It’s obvious right away on opener "Storming the Reaper" that Michael Kiske he is not – the man would be better off keeping things in more of a lower to mid-range register, giving color in a theatrical manner to the double bass fueled "Loyalty" and the aforementioned "The Seven Sorrows".

In a sub-genre like power metal, everything has its place, and the vocals matter as much as the music to most consumers. Because of this, "Heavy Duty" is an adequate but not requisite release. Those who prefer the cultural melodies and hooks while setting aside the see-saw vocal performance may dig Parsifal just fine.

WITCHERY – In His Infernal Majesty’s Service