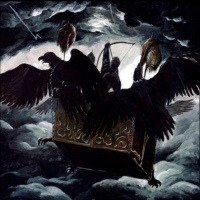 The fifth full-length installment from the French avantgarde black death powerhouse Deathspell Omega (DO), largely brings no surprises. While they do not progress from their established trademark sound, the lateral linear approach to songwriting reveals a tendency to experiment with all they already had on their plate on their past 4 endeavors plus the few eps they released in between. Aside from one track which I describe in detail below, nothing here even touches either "Si Monvmentvm Reqvires, Cirmvmspice" or "Fas – Ite, Maledicti, In Ignem Aeternum" in sound or word, to say nothing of the masterful "Paracletus", but "Synarchy" is still head and shoulders above anything the band released prior to that trilogy, especially the painfully generic and extremely predictable first two albums, to say nothing of those asinine titles and likely lyrics. "Synarchy" is mostly keeping up the status quo delineated by the likes of "Paracletus" while offering a glimpse into where, should they choose to, DO may venture in progression next.

The album being merely a 4 track affair clocking inside 30 minutes, it barely passes for a full length, but the best, and longest craziest track on record, "On War Where Most With Ravin I May Meet" (whatever the hell that may mean) begins like Opeth’s "Heir Apparent" (Watershed album) 10+ of total avantgarde with ebbs and flows, is possibly their most ambitious song to date with quite a few distinct riff hooks such as the hip-hoppy/Obituary’94 around 3:03 or Dimmu Borgian touch around 4:54 complete with a creepy apocalyptic choir, jazzy melody around 7:05, pompously epic war beats around 7:55 with a Behemothian symphonic background and delicate pinch harmonics around 9:30 recalling the end of "Paracletus" album that here also ends the overture on a peaceful note, the quality of this track alone possibly justifying the short play time. The title track, alternating between Opeth (5:30), some almost Panteric thrashcore riffing that recalls Vision of Disorder (6:15) and its own patented very chaotic "industrial" dissonant "accidental" technical black metal, is actually a lot catchier than their past with a good cold sound, while "Famished For Breath" reveals underlying harmony and hooks once you get used to the chaotic violence and a beautiful mournful delicate melody (5:09) until the end. However, the closing "Internecine Latrogenesis", with its superfast Gorguts-like, no frills, guitars buzzing like a swarm of wasps, extremely brutal technicality a’la Hate Eternal "Fury & Flames" yet shortly calming down 30 seconds before the end wrapping up in the album in a manner of Behemoth’s "Blow Your Trumpets, Gabriel" ("The Satanist" album), frankly brings nothing new to the table whatsoever, and I would even go as far as to call it lazy, given the band’s ability, skills and their past accomplishments.

Not a huge fan of this band to begin with while very impressed by the aforementioned trilogy in terms of both music and the lyrical concept, I found "Synarchy" to be a mostly pleasant affair but I do hope also a prelude to a greater more mature and sophisticated offering. If so, then I think "On War" should set the stage and a blueprint for that endeavor.