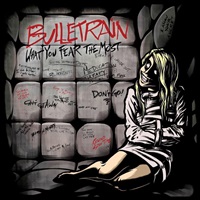 BULLETRAIN – What You Fear the Most

"What You Fear the Most" … if this journalist truly answered this question, it would be the loss of hearing, as the gift of music warms my body each and every day breathing and living on this earth. Sweden’s Bulletrain choose to use this as the title of their second full-length – already impressing the sleaze/ glam metal scene through 2014’s "Start Talking". They say you have a lifetime to craft those first set of killer tracks – but it’s the follow up that showcases whether musicians can be in it for the long haul or run out of gas creatively. In the case of this quintet, these 10 cuts continue to embody a quick hitting anthem template – chock full of catchy guitar hooks, solid grooves, and larger than life choruses.

The crux of their sound combines a slickness that put Crashdiet, Santa Cruz and Hardcore Superstar on the map along with reaching back into the 80’s playbook for mentors like Skid Row, Mötley Crüe, and Guns n’ Roses – very bluesy, properly bright in the vocals, plus the occasional tricks of the trade to gain bigger hook factors (a cowbell here, a crowd oriented shout there). Mattias Persson makes the most of his lead breaks – peeling off jaw-dropping runs during opener "Memory Lane" and the highway cruising "Feed the Fire". The semi-acoustic meets power ballad "Old Lighthouse" possesses remarkable depth, seemingly reaching back into Ozzy Osbourne / Randy Rhoads pastures a la "You Can’t Kill Rock ‘n Roll" during the opening minute instrumental segment before kicking into the crux of the arrangement- vocalist Sebastian Sundberg reaching for falsettos during the ending chorus lines.

What also helps is having a bassist like Niklas Mansson who chooses to accent many riffs with this thick bottom end presence, never afraid to bring the groove as a Duff McKagan influence seeps through "Love, Lies" while being down and dirty during the heavier "Fight With Me". Three of the members also supply background vocals, a must in this type of melodic sleaze metal where a ‘don’t bore us, get to the chorus’ mentality reigns supreme. The insane asylum/ writing on the wall animated cover art has a little different flair than the typical rock star poses or bigger than life pictures the genre often portrays.

In the end, Bulletrain deliver again another potent record full of sing-a-long rockers and anthems that should please most of the current crop of sleaze hard rock/ metal followers.