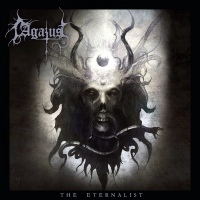 The third album from the Greek black/heavy metal band Agatus is a mixed affair. The black metal is scarce (The Invisible, Gods of Fire), the black metal shrieks/growls largely replaced with solid clean vocals throughout and the entire album is more leaning toward heavy metal with some notable doom/death and melodeath influences, while touching on progressive Pink Floydian rock (the opening title track).

The abandoning of much of the black metal is not at all a bad thing, when we get to hear fantastic guitarwork and melodic interludes such as on the My Dying Bridish "The Gilgamesh" or the gorgeous instrumental dual acoustics in the closing "To Last". Agatus is seriously inspired by the New Wave of British Heavy Metal, particularly 80s Iron Maiden, some early Helloween as well as Mercyful Fate/King Diamond (Invisible, The Oath) with some melodies reminiscent of Icon-era Paradise Lost. The opening title track recalls Sadist (Crust) or Pestilence (Spheres) with that eerie keyboard melody and even that 70s-tinged guitar sound. The songs that immediately hit the listener; "Gods of Fire" (from which the aforementioned quote) with a very catchy chorus melody that will get stuck in your head, recalls Amon Amarth for melodeath dressed in heavy metal, and "The Gilgamesh" for its very fast complex melody recalling Megadeth as well as the use of violins and the epic opening. What should be emphasized is the excellent guitarwork, lively, very audible bass that does not merely follow the guitar and impressive vocals that border on operatic.

For all its quality and flawless execution, "The Eternalist" is a little uneven, what with songs like "Dreamer" that bring nothing to the table and a few average tracks that could have used actual choruses, but the entire album generally flows well and is well worth checking out.