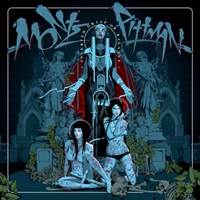 Best known for his work with Madonna live and on record or Prong at various points in his career, Monte Pittman also has a lot of affinity for the metal genre as this solo album "Inverted Grasp of Balance" illustrates. Featuring exemplary support from bassist Billy Sheehan and drummer Richard Christy, these 12 songs run the gamut from traditional, double bass metal throwdowns (opener "Panic Attack" plus "Arisen in Broad Daylight" straddling Priest/Megadeth lines) to more commercially acceptable, highway cruising hard rock numbers ("Skeleton Key"). As a singer, Monte has this alternative/melodic nature that is radio-friendly, while his guitar tone crushes in a modern manner while not forsaking the musicality evident in his lead breaks and songwriting ethics.

Occasionally being sultry and ghostly during the somber bass/vocal driven sections of "Guilty Pleasure" makes the heavier electric sections that much more impact oriented, while "Be Very Afraid" has this twisted chord combination that along with Richard’s straight forward drumming brings classic Machine Head to mind. Monte’s voice has qualities of Alice in Chains and Danzig involved in the mix, giving a little more conventional 90’s spin to the musical proceedings. Similar to its predecessor "Power of Three", "Inverted Grasp of Balance" mixes up moods and tempos so that the record never stagnates or becomes too much of one particular thing – the closing power ballad "New Blood Keeps Us Alive" with its thunderstorm effects and semi-acoustic opening to electric transition reaching back into Monte’s childhood influences from Kiss to possibly Judas Priest as it’s an emotional ending for sure.

There are times when listeners of hard rock and heavy metal prefer something down to earth, tangible, and hook driven from a vocal/music perspective. Monte Pittman keeps that front and center in his output, making this record delightful and very enjoyable as a result.