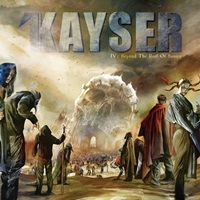 No boundaries… no limitations. That’s a very apt summation of what to expect from Swedish band Kayser on their fourth full-length studio record, "IV: Beyond the Reef of Sanity". Forming in 2004, ex-Spiritual Beggars vocalist Christian ‘Spice’ Sjöstrand along with guitarist Mattias ‘Swaney’ Svensson and drummer Bob Ruben started the group – rounded out with bassist Emil Sandin and second guitarist Jokke Pettersson. Having previously heard 2014’s "Read Your Enemy", the follow-up is more of an extension of their aural stew approach: at times thrash-oriented, sometimes more straightforward in a stoner/power realm – but always having this underlying sense of melody and groove from track to track.

Sure certain riffs have that trademark ‘I bet so-and so influenced this’ aspect – check out the "Eye of the Beholder"/ Metallica reference point in the main guitar hook for "Asphalt and Suicide", but the slower guitar harmonies and keyboard accents give it more bulk and differentiation, while the follow up "I Sold My Soul (For Your Dream)" is pure Corrosion of Conformity meets Black Sabbath bliss – chugging and swinging along with killer wah-wah action during the lead break. At other times Kayser certainly turn up the overdrive and go for more of a rhythmic chug that showcases their love of thrash -Spice choosing to use more of a melodic, melancholic nature to his vocals that contrast wonderfully and make "One Man Army" a peak moment on the record. Throwing listeners for a loop will be the 13:14 "The Silent Serenade" – it features a mid-section that can go from acoustic guitars to churning electric power rhythms – almost being very Rush-oriented in terms of the progressive nature and twists/turns that take place during this exciting arrangement.

Because the band dynamically veer into various nuances from song to song, Kayser gives us a refreshing take on groove/thrash metal with stoner influences. "IV: Beyond the Reef of Sanity" as such should give the band’s following plenty to devour and digest, as it’s an entertaining ride.