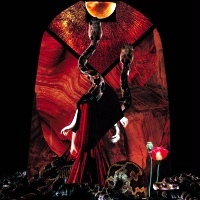 Serpent Ascending is a Finnish (Helsinki) project of a one man, Jarno Nurmi. Even if it were not, if it were a quartet or a quintet it would have been already impressive but the fact that it is a one man creation deserves special accolades. Nurmi handles all instruments while Tommi Grönqvist’s production and  Patrick W. Engel’s mix allows the bass to be so audible as if Cliff Burton recorded it. Jarno likely uses a drum machine but I will not hold it against him one bit, not when the music is this good. The music presented on "Ananku" is extremely catchy while heavy and raw death/thrash metal with some black and doom for definitely good measure. Inspirationally, Serpent Ascending sits on Obituary meets very early death/thrash Sepultura getting first 2 Paradise Lost albums pregnant on the way through first 3 Hypocrisy albums with a little bit of very early Opeth, Kataklysm and Malevolent Creation thrown in. Thus the album is rather original sounding and the production is superb for a death/thrash metal album with the characteristic "teeth" known from Malevolent Creation albums. The material is varied and it is very hard to get bored with it, besides, it is barely over 30 minutes long. There are 8 tracks on the record and they go by fast, so you might want to be near the PLAY button on your CD player.

The first track, heavily referencing very early Sepultura has about 7 different riffs in it, is decidedly the best song on the album and one of the best death/thrash anthems I have ever heard, followed by stylistically different "Rivers of Lava". Jarno already introduces the melodic side of his band and clean vocals akin to Nick Holmes (Paradise Lost) or Peter Tâgtgren (Hypocrisy) on the second track where he references Paradise Lost accordingly as well as Hypocrisy. "Northern Delirium" is actually better Obituary than Obituary cooked on a Paradise Lost stove, while "Karelides" sports a downright romantic melody that perhaps has something to do with early Amorphis. The most death metal tracks are strategically facing the front and the end of the album whereby Jarno cites Kataklysm (Male Atavism) and Malevolent Creation (Mount of Ing). Every track clearly referencing many bands testifies to Jarno Nurmi’s undeniable talent and creativity. He comes up with unbelievably good riffs like all the ones in "Entrance" or the one opening "Norther Delirium" or "Ananku I" and Ananku II". Sometimes they are complicated, other times they are almost minimalistic but always great.

"Ananku" is a metal music fan album for fans of metal music. You can tell that Jarno Nurmi has fun doing what he does and he knows his craft. He equally mixes headbanging moments, hooks and effective melodies for unbelievable memorability and replay value on an album on which every fan of metal will find something to enjoy. Albums such as "Ananku" remind me why I love metal music and it will do the same for you.