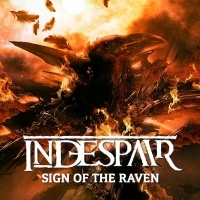 I ran into Indespair’s rhythm guitarist Daniel Bartosik by accident on facebook as he was presenting one of the songs from Indespair’s recent EP, "Sign of Raven", and, immediately impressed with the track, being in mutual love with melodeath, I contacted Daniel for a chat in our native Polish. As a result, he presented me with some of their earlier material of their debut album "Time to Wake Up" and was excited at my idea of the review of Indespair’s most recent material. Polish melodeathsters from Wroclaw had plenty of line-up changes and twists and turns since their inception in 2003. Although featured in Encyclopedia Metallum, the band is practically unknown outside their native Poland. Initially a mix of thrash/heavy metal variety with clean and slightly hardcorish vocals of Piotr Krawczyk for evocation of comparisons to Litza and Acid Drinkers, another thrash band barely known outside of Poland, eventually moved into a new territory of melodeath with the new vocalist Przemyslaw Stanczyk for a more death metal vocal delivery. I concur with Daniel that the band’s progress into much darker area of melodic death metal was bull’s eye as the music became superior while gaining significant memorability. Comparing their debut LP with this EP is like comparing the first two Killswitch Engage records in the order of release.

The opener "Through the Darkness" immediately strikes with passion and skill as guitarist Daniel Bartosik and Sergiusz Ciskowski burst with powerful riffing and multiple catchy melodies in the Scandinavian vein of Amon Amarth or Americans The Absence while giving nods to Heaven Shall Burn, with Przemyslaw’s Stanczyk’s powerful growls recalling Jamie King, Johann Hegg or Marcus Bischoff for a memorable experience. Right off the bat, the production and the mix of Tomasz "Zed" Zalewski courtesy of his ZED Studio gives an impression of listening to "With Oden On Our Side" (Metal Blade, 2006), "Riders of the Plague" (Metal Blade, 2007), or "Iconoclast" (Century Media, 2008), respectively, for the excellency of power and clarity. While this level of sound and professionalism can be heard on all three tracks, the title track, does not immediately evoke any known associations in the genre besides a faint The Forsaken memory, as Indespair mixes thrash and melodic death metal in a fairly original display of creativity and talent. The solos are spectacular to the point of  approaching virtuosity and the riffs bolstered by section of Sebastian Jarus (drums) and Wojciech Fojcik (bass) around 3:40 mark sound like tribal call to war that makes even the excellent All That Remains "The Fall of Ideals" (Prosthetic Records, 2006), flat and dull in comparison. The title track being a perfect melodeath anthem, it is, however, the closer "Under Cold Sky"‘ of which triumphant chorus did not leave my head all day since the first time I heard it, especially for that piano ending. Daniel told me that when the guys come up with riffs and melodies, if anyone has any misgivings about possible similarity to a renowned pattern, it goes out the window and it shows, but compositionally I can clearly compare his band to Be’lakor, Insomnium or In Mourning for the soaring choruses amongst little progressive ebbs and flows, Indespair clearly unsatisfied with a mere verse-chorus structure, which dramatically increases the replay value for previously unheard details. I hope this is a trend they will carry on to the full length, which is hopefully sooner than later.

If "Sign of the Raven" is any indication, the new direction Indespair took on their way to the full length follow up will inject some fresh new blood into the stagnant genre the way Insomnium, Be’lakor and In Mourning did back in a day. It may not reinvent the melodeath wheel but it will hopefully move certain unnamed bands (Trivium.cough.All That Remains.sneeze) out of their creative stupor while getting the guys from Wroclaw some well-deserved acclaim among metal heads. Highly recommended. The EP is available for free below without registration so you have no excuse.