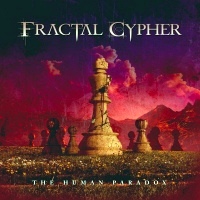 Progressive metal Canadians Fractal Cypher from Montreal, Québec, are newcomers, having released only three singles thus far all of which are featured on this full length. The album is long, 64 minutes and 54 seconds, no problem, provided that the music is interesting enough to demand 60 minute + attention span. Fractal Cypher right away brings to mind progressive metal names: Dream Theater and Scar Symmetry (the latter are death metal but a progressive kind), as well as the not so progressive such as Megadeth and Fear Factory with generous helpings of Meshuggah in the rhythm guitars and plenty of Between the Buried and Me overall craziness. Simon Lavoie’s clean, soaring vocals have definitely a lot to do with James LaBrie and even some Bruce Dickinson and Avenged Sevenfold’s M.Shadows, but he also uses some fairly original Michael Stanne (Dark Tranquillity) death/black rasps (that have me looking around nervously behind my back), yet, overall, retaining his own  identity. The sole guitarist’s Vincent Bruenau’s work is excellent, while Ludovic Daoust’s keyboards fill in the atmosphere with interesting landscapes which sometimes join the guitars and sometimes don’t. Steven Cope’s drums are a little weird sounding if tribal but Tommy Fradette’s bass is wonderfully audible which to me is one of the chief characteristics of a progressive metal or rock album. The album is well produced and mixed.

In the pursuit of their own identity the band likes to mix it up: a thick djent-like Meshuggah/Fear Factory/Scar Symmetry base for riffs with melodies and leads to huge chorus of which almost every song has at least one. In the meantime, they noodle and experiment to their heart’s content with deathcore (Imminent Extinction, Final Abode) power metallic thrash (Endless Circle, Ghost of Myself) and melodeath (Idles Word, Ghost of Myself) as well as hard rock (Awakening, Ghost of Myself), that latter influence spawning the Avenged Sevenfold associations. The crown jewels of the album: the gorgeous Dream Theater-inspired ballad "Shining Awhile" (featuring excellent solo worthy of Richie Sambora of Bon Jovi and where Simon rivals Bruce Dickinson) and the soaring anthem on the meaning of life "Prison Planet" are placed in the middle, while the most experimental populate the second half of the album such as the "Guns’N’Roses-styled  ballad "Awakening" (complete with Slash-like solo) or the Meshuggic "Final Abode". The most interesting, outside of the two crown jewels, are those where the elements are thrown in decent harmony: "Endless Circle" recalling Megadeth’s "Youthanasia"  (Capitol Records, 1994) for heavy/thrash melodicism,  "Idles Word" flirting with Between the Buried and Me progression of "Colors" (Victory Records, 2007), "Ghost of Myself" mixing melodeath and Iron Maiden with hard rock of Avenged Sevenfold’s "City of Evil" (Warner Bros Records, 2005), or"Imminent Extraction" merging Fear Factory/Meshuggah syncopation with deathcore aggression of All Shall Perish and thrashy industrial of Strapping Young Lad. Sometimes, though, ideas, lead melodies and huge choruses with fantastic solos get buried in the wealth of experimentation such as in the weird "Idles Word" with excellent chorus completely obscured by the excessive progression or the same on the opener "Lost". These are things that could have been partially addressed during mixing but perhaps a little more cutting within the songs could have brought out the melodies and harmonies for a better impact?

Fractal Cypher may be a progressive metal band but I have a feeling like they often eat from too many trees, the songwriting scattered as I sometimes catch myself not paying attention except for the glorious choruses. The music is mostly fun but what hits me abundantly is the apparent frequent incompatibility of elements. This being their debut I’m not too harsh but I do expect to see some a major overhaul of the songwriting process on the follow up if they are to go places.