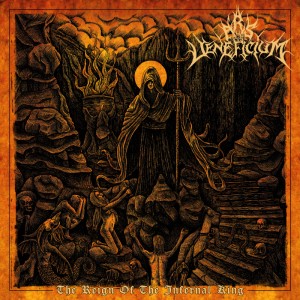 ARS VENEFICIUM – The Reign of the Infernal King

The relentless and brutal horde from Belgium known as Ars Veneficium spews forth bombastic and violent black metal of the vilest kind. These guys obviously go into battle with the aim of pulverizing you completely, which is totally fine by me.

While the nine tunes that make up the album sound like they were spawned in the deepest pit of hell, which is my way of saying that they bring to mind highly intense bands such as Marduk, Panchrysia, and Triumphator, the thrash metal influences that creep into the blackened musical landscape offer variation, which, obviously, is a good thing. "Fallen to the Realm" is a good example of one of the more unpredictable and diverse songs to be found on the album, and that hypnotic riff that brings it to a close is utter brilliance. Come to think of it, "Angel of Angels" is just as captivating albeit a bit more majestic than the majority of other songs off the album. Another highlight is the morbid "Extinguished Are the Candles of Holiness", which is perhaps the very best song on the disc and full of subtle nuances and so on.

While Ars Veneficium can hardly be labeled innovative or original, I must admit that what is on display on "The Reign of the Infernal King" is not only memorable and interesting, but also razor-sharp and highly atmospheric. Many bands fail to sound convincing when trying their hand at this particular brand of black metal, but Ars Veneficium fucking nails it. The demonic and caustic vocals are the icing on the cake, and the hard-hitting, raw, and punchy production fits like a glove. Check this out if blasphemous black metal lunacy is your thing, and see if you can get a hold of the nice-looking slipcase edition CD!