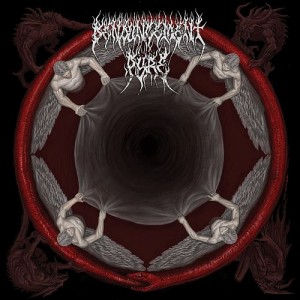 The 2010 debut (World Cremation) was a rather average affair. Presented was a well-executed blackened death metal with a thrashy attitude in the vein of early Watain. It was short (36:34) which made for a decent listen. Already, though, it has a melodic potential realized on the follow-up "Almighty Arcanum", which shows progressive touch and greater development of melodic sensibilities yet also significantly slows down to emphasize the detail and further show similarities to Watain or even Dimmu Borgir. This is evident already on the post-intro opener proper "An Extension of the Void" which pummels you into submission with crushing power and then steamrolls you with slow atmospheric heavy seemingly endless riff with an excellent drum work and Rob Halford-like stiffled scream at the end. This is no doubt some sort of dark esoteric ritual I just stepped into complete with shimmering stream of whatever and the hellish title cut. What a great sense of balance and harmony.

Compositions become grandiose, slow, morose and epic while the record still retains plenty of aggression and speed (He Who Conquers All" bringing that sort of Behemoth and Azarath metal that’s neither and both black and death metal complete with some evil chanting about releasing things you don’t wish to encounter at night. Merely on their second disc, Denounced Pyre exhibit remarkable maturity and power to behold as "Circle of Serpents" and "Darkness Manifest" showcase greater appreciation and ability for melody and may be an indication of where the band will go on the follow-up (Black Sun Unbound, 2016), while the closing "Redeemer" wraps all elements for one final crescendo.

While Denouncement Pyre left their debut in the dust with wrath and furious anger wrapped in creativity, and flawless execution, the downside is that they still don’t show anything to make them stand out from the pack of already ravening wolves. Next time?