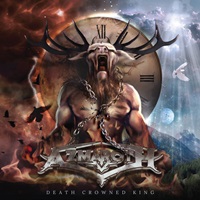 Together for a little over a year, "Death Crowned King" is the debut full-length from Norway’s Azmaroth. Playing a groove-oriented form of heavy metal that has as much in common with 90’s era Metallica as it does Pantera and Lamb of God, the marching meets exotic strains of "Reprieve" help the quintet differentiate themselves from the norm. Vocalist Tobias Røkke has that growling/scream propensity that will keep Azmaroth entrenched in the underground, but musically the group know the right pacing and construction to maximize every possible headbanging, stage diving or wall of death moments ("Ashes of Life" sure to elicit the biggest response on all fronts).

A lot of classic heavy metal touches on longer songs such as "The Mercenary" and the 8:33 closing title cut give these gentlemen more of a chance to have a wider audience – guitarists Lars Olsen and Robert Brannan Hovde along with bassist Robert Nøkleby Svendsen each getting a chance to be in the spotlight during the haunting instrumental section of the latter (think King Diamond meets Metallica here). Overall "Death Crowned King" has a certain vitality that isn’t the norm in such a newer act – probably speaking volumes of the musical abilities of each person in the band prior to joining together as Azmaroth.

Groove metal need not be all about breakdowns – you can have solid riffing and dynamic construction as well. Recommended for those who need a little adrenaline-oriented material that isn’t juvenile or ‘predictable’.