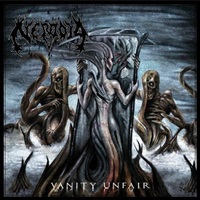 For all the spit and polish metal bands that exist in the world (clean productions, everything assembled in the right place), it’s nice every once in a while to just hear some raw, spitfire material that goes for the jugular and takes no prisoners. Italian blackened thrash band Nerodia live for the speed on their second full-length "Vanity Unfair" – an 11 track record that proves you can be aggressive and relentless while injecting the necessary melodic factors to bring the ideas home for long-term appeal to the followers at hand.

The serene minute-long "Nercomorphine Awakening" harkens back to "The New Order"/ Testament period of thrash – only to succumb to the viciousness of the follow up title track. The bee swarming guitar trills stack up nicely against the ferocious speed blasts from drummer David Folchitto – and when the band choose to maneuver into a rather controlled mid-tempo part, the hordes will succumb to a pit energy rarely attained in the metal community. Parts of "The Black Line" and "No Crown of the Dead" live for the Norwegian black scene pitting itself against the German thrash scene – guitarist/ vocalist Giulio Serpico Marini and fellow guitarist Marco Montagna laying down an axe foundation that is relentless and evil, quick to the chase to float from style to style while Mr. Marini growls and screams in a discernible, commanding way.

When the band choose to throw a little left-field curve ball, it’s in more of a Voivod or Megadeth-ish technical nuance, as the clean strumming in "Chains of Misery" or the blistering picking that takes place for a heads down "Usque ad Finem". Overall, for my first exposure to this group who’ve been active since 2004, "Vanity Unfair" leaves me very impressed and wanting to hear more.