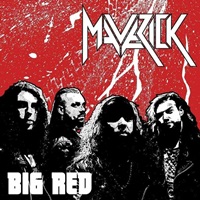 When it comes to Irish hard rock, two bands come to mind to these ears: Thin Lizzy and Mama’s Boys. Maverick would be the latest band from Belfast aiming to make their mark on the scene. Together since 2012, their released an EP and debut album each successive year, setting the stage for this second full-length "Big Red". Developing a strong sense of hooks on both vocal and musical levels, it’s apparent right on initial exposure that this quintet blend together a lot of the great kick ass US sound of the 80’s and early 90’s with the finesse and power of their European heritage.

Looking at a mid-tempo anthem like "Free" for instance, the guitar riff has a little bit of that sassy Aerosmith meets "Lay Down Junior"/ Ratt quality, built to a better groove through the swinging bass underpinning from Richie Diver and the equally mindful drumming of Mike Ross. Whereas the uplifting guitar passages of Ryan Sebastian Balfour and Terry McHugh take "In the Night" to heights of rock radio mainstay, Skid Row and Def Leppard would be proud of the catchiness here. When the band wants to get down and dirty, raw and in your face, plus project a party mood – look no further than "Whiskey Lover" for alcohol-fueled good times. Vocalist David Balfour has that charisma and potent personality to carry all the anthems, rockers, and closing ballad "Fly Away" – the band smartly including a lot of supplementary background harmonies to emphasis key verse and chorus moments. One of the latter cuts "Asylum" contains a couple of special guests, singer Jakob Samuel of The Poodles and former Alice Cooper guitarist Kane Roberts – a stirring, call to arms number that elevates adrenaline and should charge up the troops live.

The impressive start of "Quid Pro Quo" in 2014 puts "Big Red" on a similar, high quality/ high execution playing field. Those who love bands like Gotthard, The Poodles, etc. that took the 80’s template and use current production values to turn out an energetic melodic hard rock cocktail of their own will need Maverick in their collections.