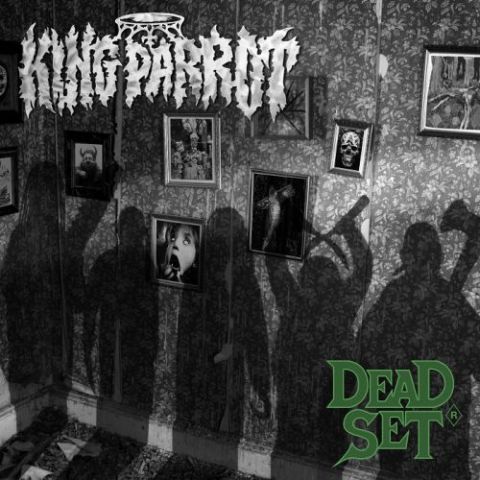 Words such as thundering and blistering come to mind whenever I listen to "Dead Set", the second full-length assault by the Aussie outfit named King Parrot. These guys have definitely evolved since the debut album, which is to say that "Dead Set" is even sharper and more lethal than its predecessor, and that’s saying something. The aggressive blend of thrash metal, death metal, and grindcore has been perfected this time around and the band as a whole sounds better and more focused than ever.

From the very first note of "Anthem of the Advance Sinner" to the spoken-word outro of the morbid title track, the listener is bombarded with intensely hateful and raw metal of the highest order. No fucking around! This is the real deal. Songs such as "Like a Rat" and the thrashy "Need No Saviour" are disgusting and yet strangely captivating and fascinating to immerse oneself in. The hysterical and bitter vocals bring to mind the legendary Macabre in places, not because they sound alike, but because they both possess that schizoid-vibe that I find so appealing (or is that appalling?). The slightly guttural vocals that creep in here and there, namely in songs such as "Tomorrow Turns to Blood" and "Home is Where the Gutter Is", add variety to the whole thing. Fast-paced cuts such as "Anthem of the Advanced Sinner" and "Sick in the Head" will rip your ugly-looking mug right off! One of the standout tracks is definitely the pummeling and crushing "Reject", which I can only imagine must be a crowd-pleaser wherever King Parrot go. Before I forget, hats off to Phil Anselmo and Michael Thompson for getting the production just right. Those guys did a stellar job with this one.

If nasty, foul, and catchy metal appeals to your depraved mind, then "Dead Set" by King Parrot is for you. These guys have a sound and an identity of its own, and they are awesome. Check it out immediately! I know that my awesome editor reviewed this album last year, but I just had to write a few words about it myself and remind all you moody suckers out there that you need this album in your collection.