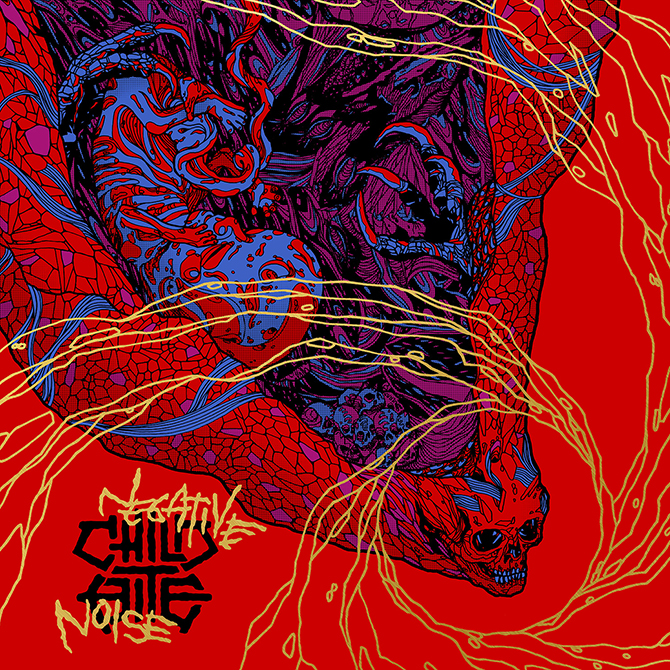 Child Bite is an interesting ensemble. A lot of people have labeled them a hardcore band, but as I am sitting here and digesting the latest 12-track effort of theirs entitled "Negative Noise", it occurs to me that these guys are so much more than a hardcore band. Sure, hardcore music looms large in the overall perspective, but there are so many influences from punk rock, avant-garde rock, noise rock, and straight-up grimy rock that it is damn-near impossible to categorize or label this band. In a way, one could argue that Child Bite has more in common with some of the pioneering punk and hardcore acts in that they weren’t afraid to experiment and push things to the margins of what people could actually stomach and wrap their heads around. In that sense, Child Bite is actually quite innovative and original.

Starting off with "Death Before Dementia", it immediately becomes clear that Child Bite consists of talented musicians who can definitely play, which is evidenced by how they manage to constantly surprise the listener by means of twists and turns within the music. It never becomes predictable or stale. While things do sound chaotic in places, everything is held together by the bass and drums. The oppressive "Beyond the Dirt" is probably one of the most progressive and experimental tunes by the band yet and almost drone-like and hypnotic in nature. Strange and dissonant shit but very compelling. "Heretic Generation", which is one of my favorite tunes off this album, constantly shifts between intensity and melancholy. Awesome stuff!

The more one listens to "Negative Noise", the more apparent it becomes that this is a diverse and emotionally charged record that is anything but one-dimensional. The lyrics by Shawn Knight (vocals) are strong and definitely leave an impression, especially "Paralytic Phantasm", "Vermin Mentality", and "Heretic Generation". Also, the organic production suits the song material perfectly.

"Negative Noise" is, as I mentioned earlier on, a breath of fresh air and a most welcome addition to any punk/hardcore/metal head’s collection. Whenever I listen to this album, bands such as Misfits, Black Flag, Voivod, Dead Kennedys, Ramones, and even a few old surf rock and space rock acts come to mind, but that doesn’t change the fact that Child Bite possess a sound and an identity of their own. It may strike you as weird at times, but it is all the more beautiful and captivating because of that.