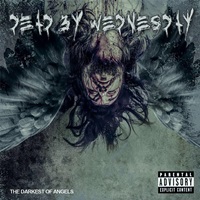 DEAD BY WEDNESDAY – The Darkest of Angels

Fortunate to witness this CT metal act at last year’s Mayhem festival finale in Hartford, it’s logical that the band would move up the ranks and unleash an album with "The Darkest of Angels". Losing their long-time vocalist Joe Morbidelli due to battles with addiction, this fourth full-length studio effort features a number of notable guest vocalists track to track – including Brian Fair (Shadows Fall), Rob Dukes (Generation Kill), Eric AK (Flotsam & Jetsam), John Arch (ex-Fates Warning), and Carly Coma (Candaria) in addition to their newest vocalist Rob Roy.

Those not aware of the band’s musical style, it’s one that is crossover in the sense of metal is the foundation, but aspects of punk and hardcore seep in as well as a strong modern groove component that push the low end aspects for maximum audience movement, especially in the live settings. Guitarist Joey Concepcion unfurls a killer arpeggio-oriented lead break during "Self-Medicate" to offset the more standard riffing and modern rock melodies of Paul Stoddard. The follow up "Power Troopers" is more in a Deftones mold, rap oriented screams and words against a crossover metalcore oriented soundtrack. Overall those into Lamb of God, Arch Enemy, and Pantera with a bit of technical fluidity in terms of the lead breaks will understand where Dead By Wednesday is coming from.

The guest idea could get a few fence sitters over to their camp – but most of all "The Darkest of Angels" is a groove metal-oriented record that probably appeals best to the teen to early 30’s crowd. An acoustic ballad like "The Surgeon" which happens to feature their permanent singer Rob Roy could easily be a rock radio hit, something that put Staind or Shinedown in the hearts of millions. A crossover type record that will certainly gain its fair share of appeal, "Darkest of Angels" rocks- and that’s what matters most in this style.