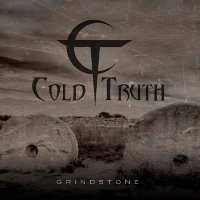 Nashville, TN is not only known for its country music scene- there is a decent rock following as well. Together since the early 2000’s and with two full-lengths under their belts, Cold Truth on this third outing "Grindstone" deliver 12 tracks of impressive blues-based hard rock. Equally conveying the musicianship and harmonic sensibilities of the southern rock scene (think Lynyrd Skynyrd) with a lot of British based influences (Bad Company, Whitesnake) and a dash of maybe older Montrose/ Sammy Hagar and you have the gist of where the four-piece will take you.

‘Solid gold medallions… heading to South Dakota’ glistens from the whiskey soaked bluesy register of guitarist Thane Shearon on one of my early favorites "No Sleep ‘Til Sturgis", highway ready for motorcycle riding, bar busting good times, the quick hitting twin guitar harmony that Kurt Menck teams up on during the mid-break on par with the main chord progressions and very Thin Lizzy-esque. There’s even a little bit of that simplistic AC/DC groove at times that makes "Leave Your Leather On" equally infectious – the lyrics playful in an obvious sex meets rock ‘n’ roll tale. Everything from cowbell to wah-wah action to gospel-oriented background vocal support gives off a proper 70’s vibe, certain tempos possessing that Southern swing that makes "New Horizon" and "Give It Time" distinct and respectful.

We know that there are a ton of ‘retro/throwback’ bands offering up their take on the 1970’s. Cold Truth serve up solid ideas but do not sacrifice in the production department – as the clarity is more in line with today’s scene. "Grindstone" showcases a quartet who know what they want to execute, going about things properly and delivering a solid front to back bluesy hard rock record that will sound just as killer today as it will decades from now.