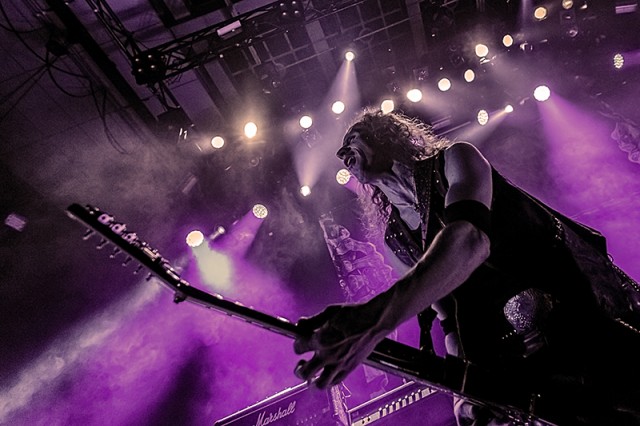 ICS Vortex showed Rockefeller that heavy metal doesn’t always have to be bruting and dark. With a nice attitude and a very folkish appearance, Vortex and his crew delivered one of the most solid performances of the festival yet. Showcasing good old Borknagar songs as well as his own material. The energy was great both on stage and in the audience, allthough alot of people hadn’t really gotten to the venue yet. The music of ICS Vortex is quite easy to digest, and there isn’t too much depth for people that aren’t too acustomed to the Norwegian scene. A nice and easy start.

The Polish band, Vader, was the evening’s oldest band, but that didn’t stop them from throwing one hell of a show. The thing about their music is that their style hasn’t really changed that much since their first album, so they still hold on to their old school image. And their style makes for a great live show as well. The audience was on fire. The sound was amazingly good and they had good light show as well. All in all a great performance and a great example of the old school maintaining their control of the scene.

Marduk from Sweden is one of those bands that shaped the Swedish black metal scene and made it into something that Sweden could be proud of instead of just a copy of Norway. These guys presented Rockefeller with a dark and atmospheric, yet brutal and blunt form of black metal. Marduk’s greatest feature both musically and in their performance is that they are very recognizable. They have a very special identity and that was easy for them to portray live. Powerful imagery to powerful music. Marduk also had a very nice control of their audience, and they seemed to enjoy their time on the stage, which in turn made it a very enjoyable time for the people listening/watching.

Mysticum was the last band of the evening. Their presence on the stage was quite special, as they were placed on one pillar each (no drummer) and most of the visual show relying on imagery from a computer. Musically, this is a very interesting band in the way that they are breaking with conventions, which is always a good sign. That being said, the result isn’t the most endeering or inviting, and it ends up being a little stale in the end. Absolutely something people should have seen once, but that one time might be enough for alot of people. However, their core fans seemed to be really in to this weird, static band, and that goes to show that the people that like this kind of music and performance are really going to enjoy seeing it. They performed well with good sound and they gave their fans what the fans was craving. So in that regard, this was probably the best way to end the first official night of Inferno 2016