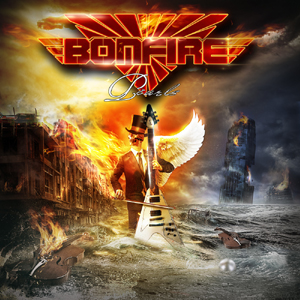 I was not really that familiar with Bonfire before I popped this CD in and cranked up the volume. I had often stumbled on the name of the band but never actually listened to the music, if that makes sense. I am kind of regretting that now. "Pearls" is a 2CD "best of" release consisting of a bunch of re-recorded classics (disc one) as well as another batch of classic cuts featuring an orchestra (disc two). It is quite cool that they have dubbed the first disc "Rock Pearls" while the second one with the Italian Symphony Ensemble is entitled "Classic Pearls". I believe those titles say it all, really.

Truth be told, the first disc without the added orchestra is definitely the most interesting one. Not that the second one sucks or anything, but the first one is just so much fun to listen to and loaded with great riffs, soaring vocals, pounding drums, and awfully catchy hooks. It is impossible not to sing along and act like a lunatic when listening to the entire "Rock Pearls" disc. Comparisons to Whitesnake, Def Leppard, Judas Priest ("Turbo"), and Accept can certainly be made, but I dare say that Bonfire has a musical identity that they can rightfully call their own. There are traces of southern rock, boogie rock, and country rock, too. The production is really strong and the songs sound powerful and vital. There is a lot of energy at display here. Sure, the lyrics are a bit cheesy in places, but that does not detract from the fact that I am loving this stuff. I could have done without the Lynard Skynard cover, though.

As to the "Classic Pearls" disc, it is neither as memorable nor as fun to listen to as "Rock Pearls", but that does not mean that it is without merit. As I mentioned earlier on, this one contains re-recorded songs with orchestrated and symphonic parts added, which is not exactly innovative as many other outfits have done something similar many times over, but I think Bonfire pulls it off quite nicely to some extent. It is less energetic and way more mellow than "Rock Pearls", but I think that songs such as "You Make Me Fell" and "Southern Winds" show a different side to Bonfire and proves that these guys know how to vary their material. Epic and melancholic in places, but also a bit overblown and pompous here and there. Nevertheless, "Classic Pearls" has its fair share of captivating moments.

For some reason, "Pearls" make me feel like a 15-year old pimple-faced teenager again…and that is totally fucking awesome! This is melodic hard rock at its best, and even after thirty years these guys have clearly lost neither the will nor the determination to kick our asses properly. "Pearls" is certainly a great introduction to the band and its music. Thanks to this release, I am off to check the rest of their catalogue out.

Before I forget, check out the excellent interview that my colleague, Matt Coe, conducted with Bonfire vocalist David Reece elsewhere on these pages. That is a great read.